Pondicherry: A City the French Left Behind… 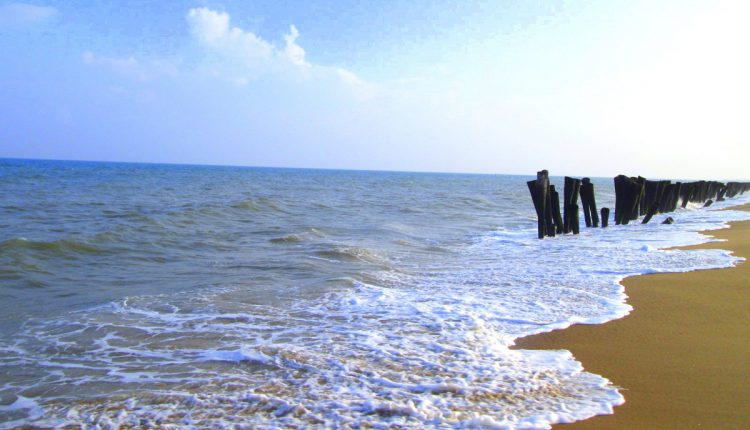 My seasoned travel mate and I backpacked to a little coastal city tucked between the Bay of Bengal and Arabian Sea known as Pondicherry — and now officially as Puducherry (by which it’s rarely addressed) — but affectionately called “Pondy”.

Why I enjoy making a stopover every time I’m headed south of India to this famously dubbed “French Riviera of the East” is because you don’t travel to Pondicherry and go frantically scouring  your travel itinerary for “places to see” and “things to do”. Don’t get me wrong, there are places to see and things to do, but it’s more about soaking up its famed Indo-French culture.

For nearly three centuries before India’s independence, Pondicherry passed through the hands of the Dutch, British and French colonists. While citizens forego a possibility to remain French in 1954, the union territory still retains subtle remnants of the French culture that pervade the small beach town popular with western tourists.

We arrive at Ville Noir — the black town part of the city, and move towards the Promenade where the city beach is located. The change in urbanscape is stark: brick-lined pavements, pastel shaded colonial styled villas, sunny boutique hotels and guest houses, and roads that have still retained their French names. We know now that we’ve arrived in the French Quarters, or Ville Blanche (white town), as they call it.

The Memoirs of the Epic Trip

We decide to be hosted at a boutique guesthouse located on Dumas street that is run by a British man and his French wife, one of many European couples who have made Pondicherry their permanent home.

The harmony with which the two cultures have merged since its colonial past begins to rub on us as we move from the Joseph-François Dupleix floor (opening onto the calm, unadulterated view of the sea) to the Mohandas Gandhi Quarters (with its own private library stocked with books on philosophy, new-age lit, art and a large dose of Vogue magazine!) 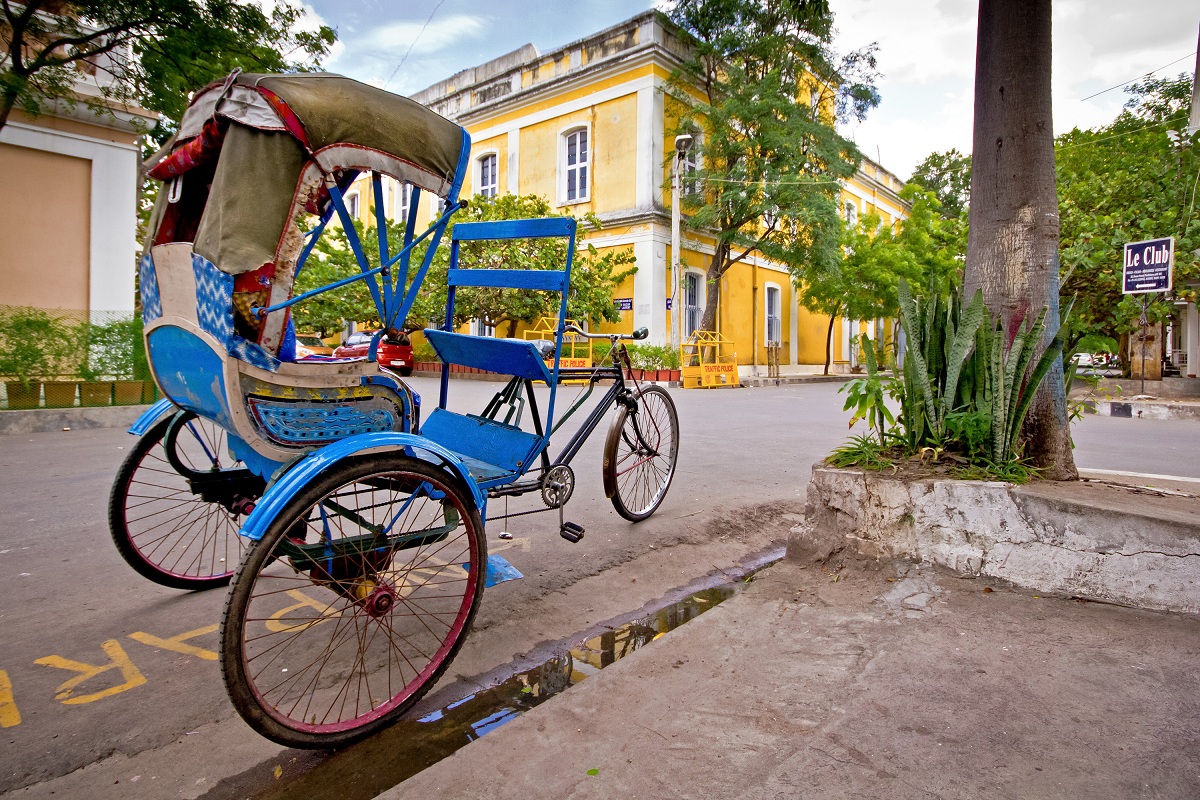 It’s a hot and humid sunny day, so we grab a bike, map and sunglasses, and leave to navigate the glories of the colonial past as  the French war memorial, Gandhi and François Dupleix statues erected around the Promenade pass us by.

Look Around the French City in India

The Basilica of the Sacred Heart of Jesus – a favorite with Christian pilgrims – is a 17th century church built in Gothic architecture with rare stained glass panels, located on the South Boulevard.

A sense of calm pervades the air as we push through the silent streets with just the right amount of tourist smattering and locals to see the Sri Aurobindo ashram. Although the meditation center generally draws a large crowd of European spirituality-seeking yogis, yogi wannabes and well…yogis, the sense of time is slow which allows for the real purpose of introspection. It also has guest accommodation with an attached library largely selling books authored by Sri Aurobindo— a philosopher, freedom fighter and spiritualist, and his aide and spiritual collaborator “The Mother”.

A visit to the Pondicherry Museum proves the city’s spectacular past: Carriages and rare Victorian furniture from the 18th century belonging to princes, governors and generals; and other rarities found at archaeological digs in Arikamedu. The highlight of the day remained “Danae”— a sensuous painting by Italian artist Antonio Corregio. 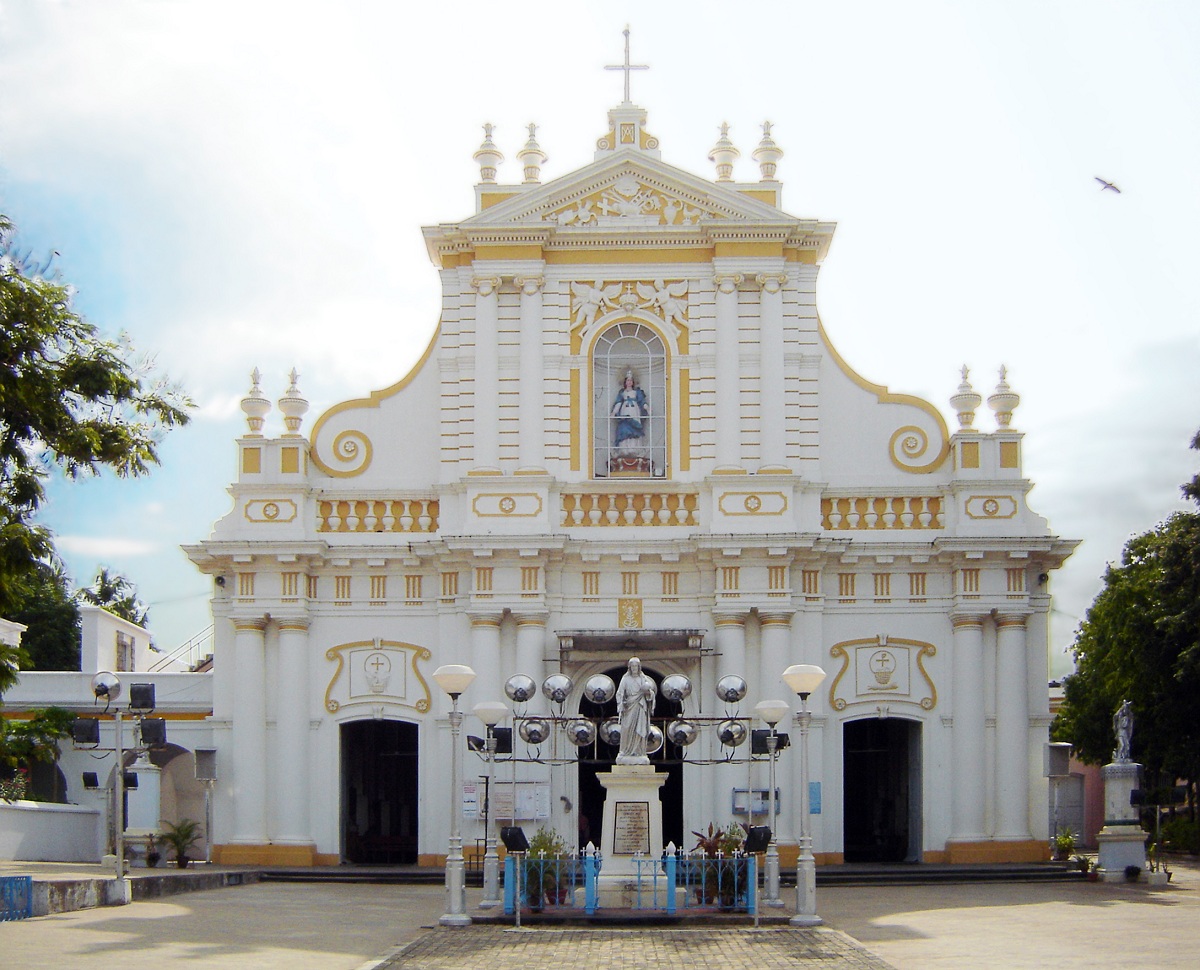 At the French Institute of Pondicherry (which is usually closed to the public), we counted our lucky stars to have been taken on by a bored but thankfully enthusiastic researcher who allowed us to see (and touch!) a 16th century palm leaf manuscript. The institute is home to some rare palm leaf manuscripts dating back to as early as the 14th century and it carries out research missions in Indology, ecology and social sciences.

When time takes its time, it’s easy to indulge in guilty pleasures: eat, drink and be merry! Eating out here can be quite tricky as the French Quarters are filled with restaurants, bars and cafes that boast both French and Indian cuisines. We found ourselves daily for breakfast and lunch at Baker’s street–a French bakery/café that serves the best quiches, pizzas and pastries in Pondy town.

What to Eat & Where in Pondicherry?

Coffee is best drunk with a book for company at Coffee.com  — a French indoor café/guesthouse serving great coffee and Wi-Fi. I fantasized every night for the remainder of our stay about heading back to the café and making desperate attempts at writing lonely meanderings of the mind…(I blame it on the balmy evening weather). 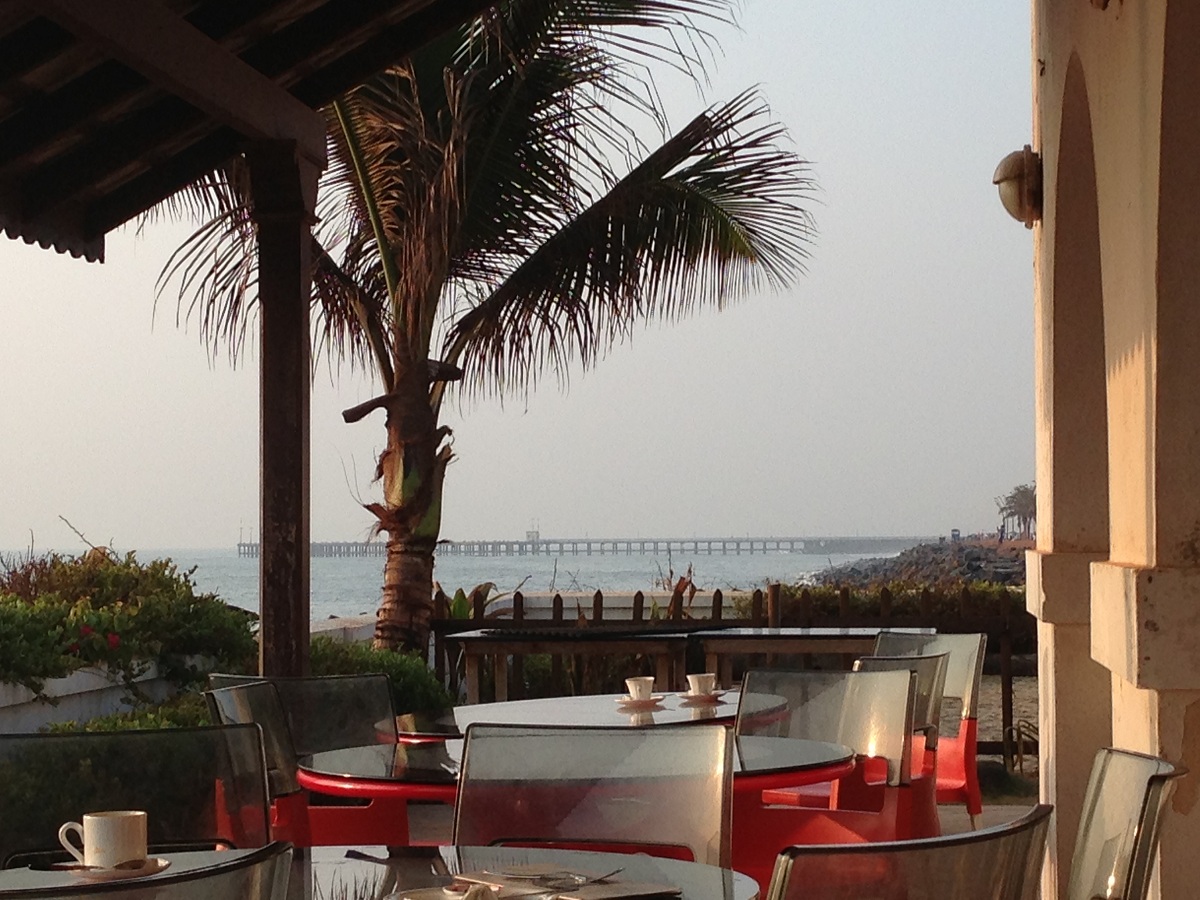 Café des Arts is another excellent outdoorsy café/bar/restaurant serving the most authentic French food, with an art boutique and reading area that allow for a great mid-evening slump.

You Should Make a Stop at These

Alliance Française — the French cultural center, usually conducts art workshops, film screenings and plays on most evenings. We were lucky to view some spectacular Cannes film festival French movie screenings for the year! The place is great to meet and network with other tourists and like-minded wanderers of the artistic kind.

Nirvana, a boutique store nearby, stocks some amazing kitsch and pop art collectible items, clothes and accessories by local designers that are worth a buy. I was especially impressed with an old rice sack from a company in the early 90s turned into a hot sling bag. 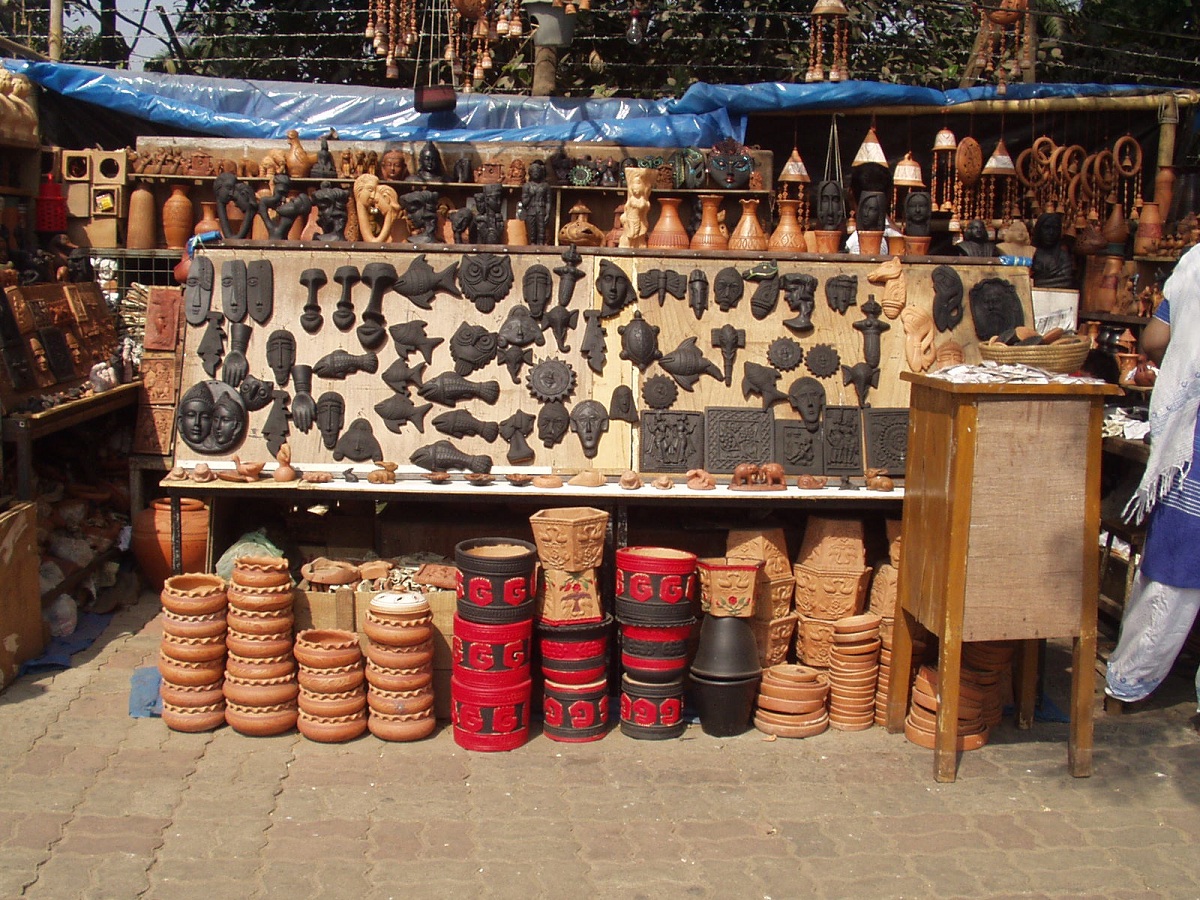 Antique stores in Pondicherry are galore and can easily beckon those with a wider pocket to indulge. I found a rare 15th century two-volume Bible, an heirloom that the storeowner procured from a Jewish settler in Pondicherry. I promised to come back for the purchase (along with someone qualified to perform carbon dating, of course).

A trip to Pondicherry without visiting Auroville — an international township endorsed by UNESCO and also called “The city of dawn” — is a mistake.

Auroville is home to some of the best virgin beaches, cafes, galleries and hippies backpacking from Europe.

Its main attraction is the Matri Mandir, an astounding golden dome meditation temple with the world’s optically perfect crystal globe at its center. The structure is located in a beautiful area called Peace that has around 12 gardens in over 22 acres of land, attracting thousands of yogis every year. 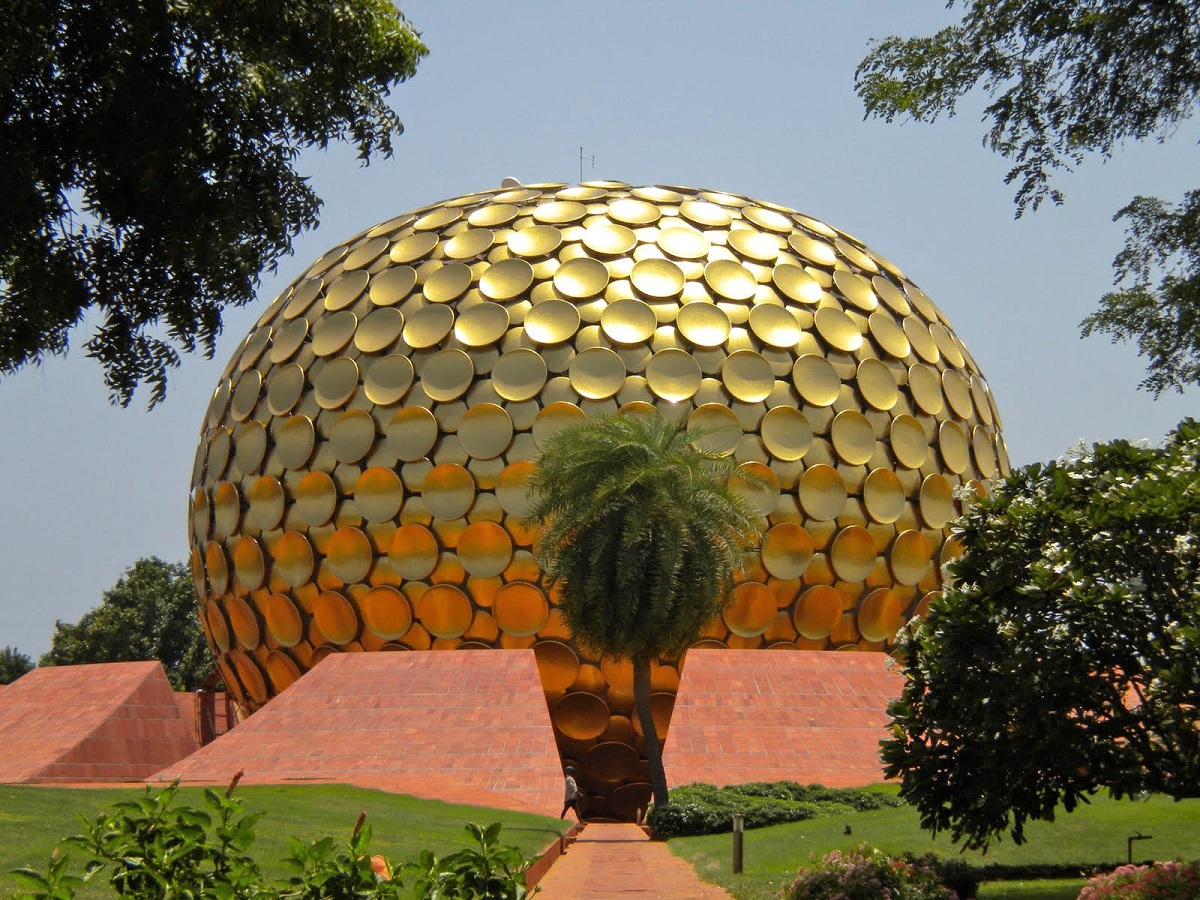 Entry into the meditation center is restricted by prior appointment and a video orientation program, although visitors have access to the premises that has an interesting book-store, a restaurant serving great herbal teas and Indian food, and boutiques that sell the best in designer products made in Auroville: exotic incense, ayurvedic concoctions, clothes, jewelry and accessories indigenous to the area.

Auroville is an experimental model city that is being built to carry out the spiritual vision of Aurobindo and The Mother to welcome “people from all communities from all around the world who will forget their differences and live in harmony with each other.”

And this is why visiting Pondicherry should be in your top “places to see”. You owe it to yourself: to experience peace and a harmonious co-existence of cultures.

Book your flights to Chennai, which is approximately 135 kilometres away from Pondicherry. Then hire a private taxi, bus, or book a train ticket to reach Pondicherry.