The Ushaiger Heritage Village is tucked away in the Najd, an oasis-dotted region located approximately 200 kilometers north-northwest of Riyadh. Bedouins were the first people to settle there about 1,500 years ago. Because of its springs and low-lying olive and palm groves, it quickly became a popular resting place for pilgrims on their way to Makkah. 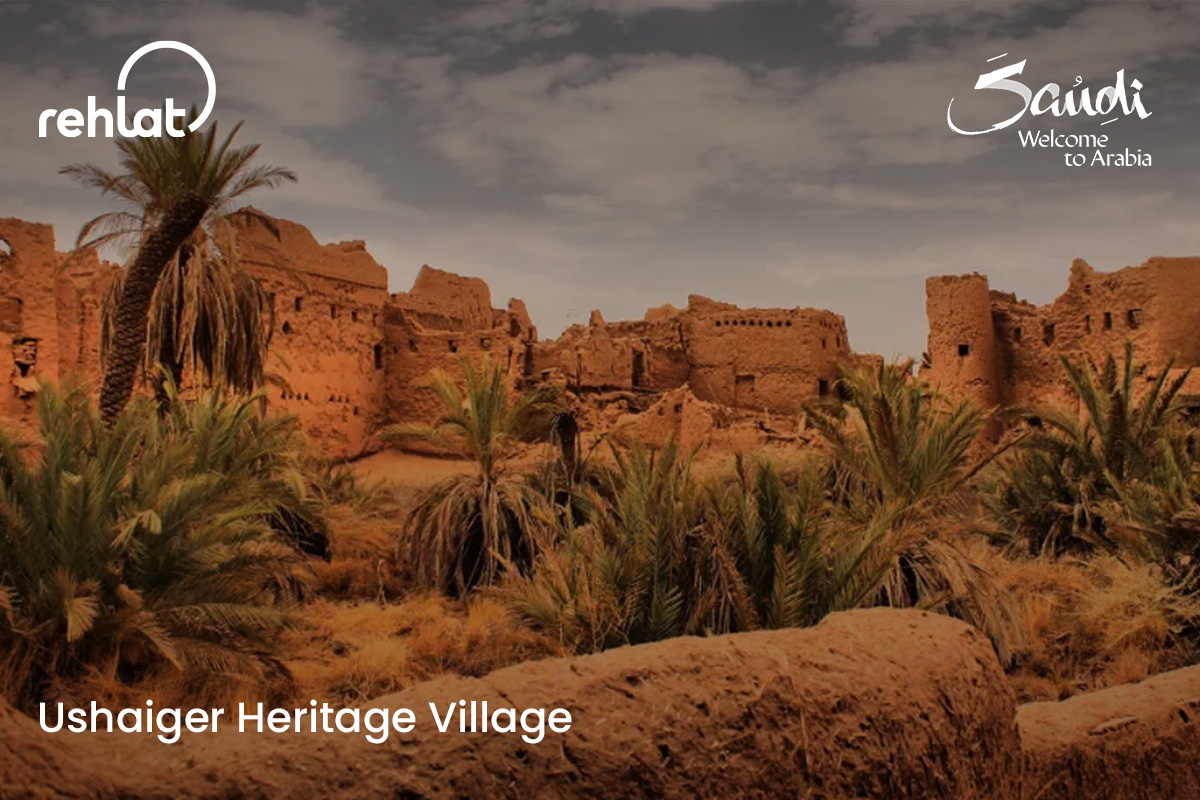 Simply entering one of its winding streets is like stepping into a living museum filled with artifacts and relics from a bygone era. A red mountain stands tall over the yellow mud homes of a small community of people who use the town’s mosques, shops, and schools. The Ushaiger Heritage Village, tucked away in the Najd, offers a glimpse into an old, peaceful Saudi lifestyle. The community, which has a collection of admirably maintained homes, is separated into districts and split in half by palm tree groves. The triangular windows, roofs, and elaborately carved wooden doors, provide a spectacular example of Najdi architecture.

If you are excited to visit the place already, then book your flights to Riyadh right away and then read further!

In Al-Yamamah and throughout the Arabian Peninsula, Ushaiger served as an important center for the arts, culture, and trade. It is a popular destination for academics, merchants, Orientalists, and tourists due to its abundance of archaeological sites, parks, and green spaces.

The village can be found on the Al-Washim plain, only a few kilometers west of a small group of red dunes known as ‘Urayq Al-Bildan.’ These dunes extend north and, 100 kilometers away, become the enormous Zulfi dunes, which eventually connect to the vast Nefoud Al-Kebir, a large sand dune desert in the northern part of the Arabian Peninsula. Around 1500 years ago, the first people to settle in this region did so. At that time, pilgrims frequently visited the village on their way to perform the Hajj.

Things To Do At Ushaiger

You can enter some of the abandoned homes and climb the stairs to get a better view of the oasis and farmland that is in the area. The village is segmented into districts and then further subdivided by palm tree groves, and each district contains a collection of tastefully renovated homes.

These are absolutely stunning examples of Najdi architecture thanks to their distinctive triangular windows and roofs as well as their elaborately carved wooden doors. In some, the names of the families who formerly lived there are still displayed.

Ushaiger is also the second city in the Al-Washm sector, and has an undisputedly greater reputation in the area’s history, particularly in the fields of intellect, science, and commerce.  It is connected to the memory of history through all of the evidence of the authenticity of the heritage and its specifics of it. This evidence includes the ruins of old homes and palaces in addition to the Ash Shamal Historical Mosque, Al Bawardi House, and Al Jumah House.

The ancient mud-and-brick Ushaiger village has a significant amount of sentimental value for the residents of its surrounding area.

Experience devotion at the Mosque of Al-Faylaqiah

This stunning heritage mosque was built in the ancient village of Ushaiger several centuries ago and is widely considered one of the most important mosques in the area. The expertise with which the region’s people built the typical mud structures in the past is demonstrated by the domes, columns, and a square beacon incorporated into the structure.

Throughout the centuries, many religious scholars and Imams used the mosque as a meeting place and a Holy Qur’an that dates back some 400 years was found within the mosque.

The interiors of these homes made of mud and straw have such intricate designs that they give visitors the impression of being transported back in time. The open-air roofs and numerous triangular windows characteristic of the Najdi architectural style allow natural light to enter the homes.

The sparsely decorated homes of the Ushaiger people are accented with antique lanterns and traditional fireplaces, both of which contribute to the unsettling ambiance. The town of Ushaiger is one of a kind due to the decision made by several local families, who held their heritage in such high regard that they wanted to preserve it by restoring several buildings and sections of the town to their former splendor.

To get into the heart of the historic village, which is encircled by a high wall with several enormous towers, guests have to go through some substantial doors crafted out of ithal (tamarisk) wood.

Some of the remodeled homes are open to the public and still bear the name of the family that formerly lived there.

Al Salem museum is worth the time and effort

The museum of Ushaiger, the first significant structure visitors see after entering the village gates, displays the practices of the community in addition to its rich history. Definitely spend some time exploring the museum that the villagers built using a variety of artifacts and historical relics that they collected from the people in the surrounding area.

The museum curators will be more than happy to give you a tour and explain the fascinating history of each artifact. They have a wonderful selection of different types of ethnic clothing, such as vintage abayas that are surprisingly brightly colored and intricately detailed. If you have any inquiries, the friendly residents of Ushaiger will be delighted to tell you about their backgrounds and regale you with stories about the area’s history.

Get bewildered by the centuries-old irrigation system that outshines advancements

Ushaiger is encircled by ancient farmlands and an oasis, both of which the locals took advantage of to construct advanced irrigation and water collection systems. The precious water, meant to be preserved and distributed, was obtained from one of the many wells interconnected throughout the village.

The people who live in Ushaiger have a reputation for being very kind to one another, and it’s not uncommon to find them chit-chatting and reading the newspaper while perched on park benches. Tourists are warmly welcomed at any time, and the residents will gladly take them on tours of their cherished community when they arrive.

Visitors are typically invited into one of the recently renovated mud houses to enjoy Arabic coffee and dates. If they are fortunate enough and have the time, guests are more than welcome to participate in the family dinner.

Indulge in snacks are as retro as they sound and taste

One of the best ways to wind down at the end of the day is to dine at a casual eatery that offers outdoor seating and is located close to the main entrance. The shops are also like stepping back in time. They sell regional sweets in customary designs and shapes in addition to fast food and soda. When you crave food on a Friday, you can satisfy it at a cozy restaurant with a limited but delectable menu, serving both simple and delicious food.

Follow footsteps of great men who were born on this land

Ushaiger takes great pride in the fact that it was the birthplace of several important historical figures, including the well-known religious leader Muhammad ibn Abdul-Wahab and the Islamic scholar Sheikh Al Othaimeen. For a large number of poets and thinkers’ birthplace and workplace, the locals refer to it as “Najd’s Womb.”

Spend some time in Al-Rayan Park

Al-Rayan Park is a game reserve which can be found on the northern side of the Ushaiger traditional village, approximately 7 kilometers away. Due to the presence of approximately 2,000 perennial trees, the park is a popular destination. The garden is distinguished by palm tree trees, balsam trees, almond trees, and sardine trees, as well as shrubs of sedition, in addition to the lovely olive tree and several other bushes.

You will be treated to titillating vistas if you come here

The village of Ushaiger is one of the most peaceful places you’ll ever visit; a trip there will teach you a lot and make you feel humble and serene. A trip up the nearby mountain, which offers breath-taking town vistas, is highly recommended. Admire the glowing sunset as you survey the extensive settlement below you, rich—in every sense of the word—in talent, history, culture, and tradition. Their dedication is astounding, and their hospitality is out of this world. 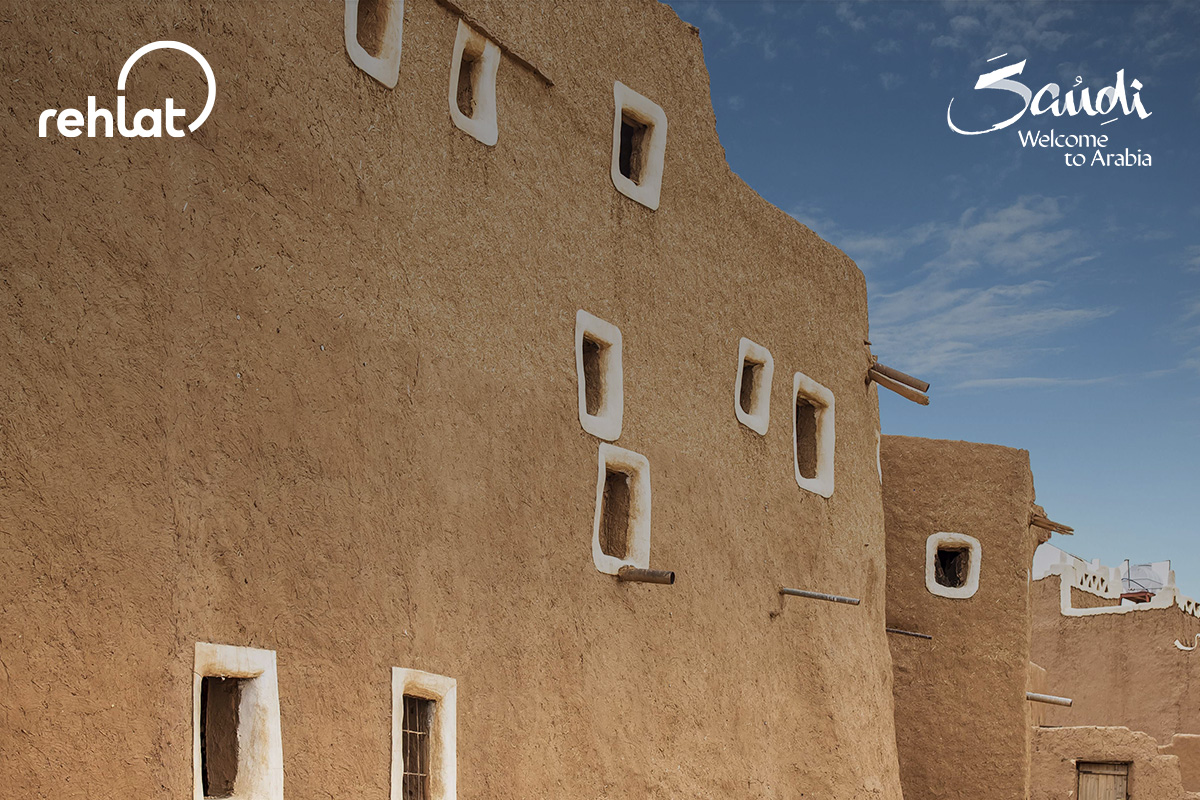 Take a stroll around these mud walls!

You’ll spend your time traveling through time and pondering how the past led to the present. The pictures you take with you will also be stunning; they will be portraits and landscapes of old and new, of the lost and the discovered, and of hopes and dreams!

If you are looking for your next summer holiday spot, Saudi Arabia should be your pick! Use Rehlat’s special flight offer to save up to 25 USD on flights to the Kingdom. Use code: SAUDI while booking. Also, get up to 12% off on hotels in Saudi Arabia with code: STAY12.

Explore The Best Of Qatar Travel Scene In Just 7 Days