Intricate arrangements of herbs, flowers, and grasses are historically worn as headdresses by the Qahtani males, a colorful tribe with deep roots who inhabited the foothills of the Aseer mountains in southwest Saudi Arabia. And today, the world is learning about their customs. The Flowermen Festival looks into Saudi Arabia’s previously shrouded past as the local men perform on stage to the local music in front of an attentive audience.

Being present at this time and seeing a festival of this magnitude in the immaculate ancient town of Rijal Almaa are both fantastic experiences. This festival seeks to delve deeper into the culture of flowermen. 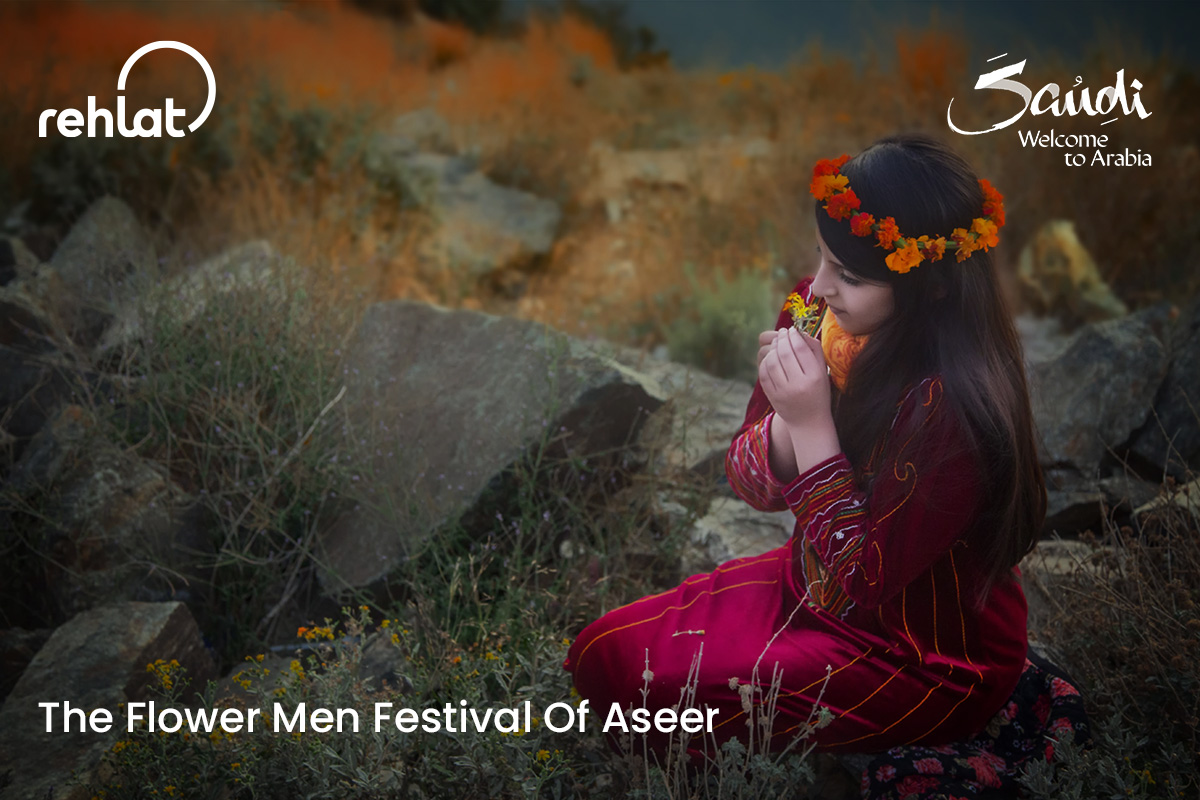 The Flowermen Festival is a visual representation of the Aseer region’s rich cultural tradition, which has been flawlessly preserved and kept up. The young and the old don garlands, link hands and dance happily as a celebration show, from fantastic music and horseback riding to Aseer village items manufactured by the locals and live entertainment. Always focused on the environment and living in sync with it, the Aseer area is becoming a UNESCO historical site. The festival also has three main focal points for its themes.

Story Behind Celebration Of Flowermen Festival

There aren’t many locations in the world that have been conserved as well as the Aseer area, with its old towns tucked away in the mountains. Male members of the Qahtani tribe are referred to as “Flower Men” in the Aseer province of Saudi Arabia because of their meticulously crafted flower headdresses. The red and orange flower crowns are worn to improve both beauty and health since some of the flowers used in their creation are said to prevent headaches and sinus issues.

The Arabic word for tough, “Aseer,” also refers to the challenging topography in the region, characterized by rugged and uneven cliffs and the struggles faced by the Qahtani tribe. Aseer is a wealthy and diversified region; the flower men’s home of Habala is located an hour’s drive from Rijal Alma and Abha, the region’s seat. The Qataris, one of the oldest socioeconomic groups in the Arabian Peninsula, earned the nickname “Flower Men” due to their traditional headdresses. The materials used to create the crowns differ according to the occasion: some are worn for ceremonial and religious occasions, while others are worn for aesthetic and therapeutic benefits.

The Flowermen Festival is a well-balanced celebration of the natural world and the illustrious local culture of the villagers. The festival showcases how the interconnected communities survive and thrive symbiotically with nature and gather flowers for garlands.

It looks into Saudi Arabia’s previously shrouded past as the local men perform on stage to the local music in front of an attentive audience. The flower men are a popular tourist and cultural attraction, performing their distinctive rituals for tourists in front of stunning, unspoiled scenery.

How Is the Flowermen Festival Celebrated?

An open-air museum, live folk performances, art and poetry nights, a heritage market, and other events are a part of the Flowermen festival. It gives visitors a genuine sense of the history of the flower men.

A Spectacle Of Time-Honored Traditions

Groups of young boys and older men wear elaborate crowns made of colorful native grass and flowers. They have henna-dyed their hair and beards red, wear calf-length skirts with vibrant horizontal stripes, and each has a large knife tucked into his belt. Both men and women can wear garlands, and they’re not just for show. The marigold, thyme, basil, and other flowers and herbs used in the wreaths have medicinal benefits and fragrance the air.

The younger men of the tribe treat the creation of these floral crowns as a friendly beauty contest, adding as many vibrant accents, like marigold and jasmine, as they can.

Contrarily, men in their middle years and older use a more solemn approach, making their wreaths from plants like wild basil. Others adorn themselves for special occasions, such as significant Muslim festivals, while some wear them regularly for aesthetic reasons.

Expression Of Culture Through Performing Arts

The southern Ardah, a rendition of a battle dance performed throughout the peninsula and the Gulf, is the most well-known dance. The all-male dancers stand in two lines facing each other and recite poems aloud to the sound of tambourines or drums.

The ney, a flute played for at least 4,000 years, is one of the most well-known of the other instruments. The fact that the people of Saudi Arabia lived a nomadic lifestyle and drove their flocks throughout the peninsula under the seasons significantly impacted the country’s traditional music.

The variety of traditional songs includes military songs to energize the troops for battle, as well as regrets and serenades performed by lone shepherds. Unmistakably Arabian rhythms and the exuberant release of a celebration following arduous days of labor on the steep mountain terraces where many Flower Men still work.

None of the performers are musicians in the traditional sense; instead, they are farmers, truckers, teachers, soldiers, and clerks who began practicing the dance moves practically as soon as they learned how to walk.

Additionally, as part of the Flowermen festival, Rijal Alma’s historical stone structures are illuminated at night and include sophisticated video mapping performances. Families from the area and tourists assemble in an amphitheater-style setting to marvel as vivid, swiftly changing, and richly colored patterns echo across the historic stone structures. The indigenous women paint their homes with these same hues.

Visitors are as entranced by the high-tech visual mapping as they are by the numerous stalls of regional artisans that line the street. Men produce ceramic pots and vases, while women use local resources to make perfume, bokhur, or Arabic incense.

Abayas and robes with intricate decorations are sold at one stall, and Arabic sweets and coffee are available at others.

Where Is It Celebrated?

An important commerce hub connecting Yemen, Makkah, and the Levant via the Red Sea previously existed at the old, isolated settlement of Rijal Alma, located in the Aseer area of southern Saudi Arabia. However, it is now a heritage monument and a growing tourist destination.

The main plaza of the old town of Rijal Alma, which is overshadowed by sloping hills and ominous towers, is the focal point of the inaugural Flowermen festival. 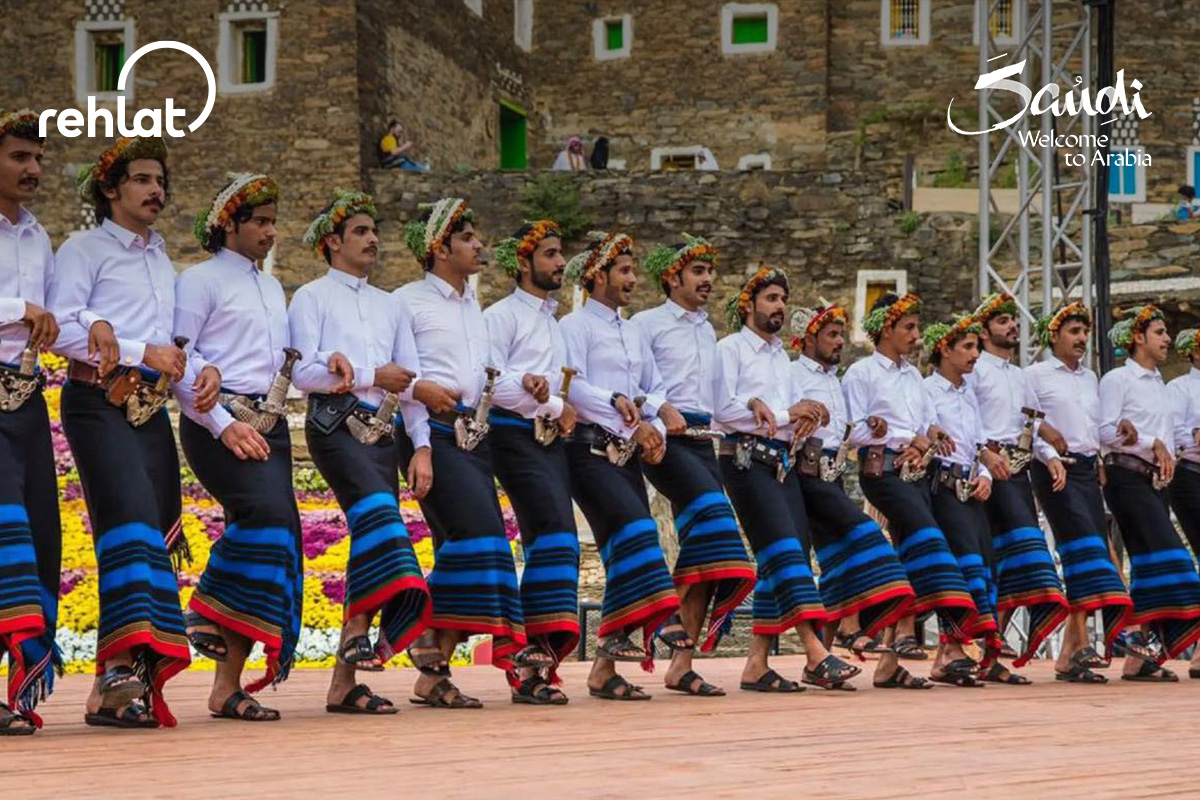 Ancient artifacts and legends resonating inside the distinctive architectural patterns of Rijal Alma hamlet for more than 700 years are historical proof of its early civilization.

The exterior walls are heavily covered with white quartz stone, while the interior is decorated with exquisitely crafted artwork. The town consists of 60 aging multi-story buildings composed of wood, stone, and clay. Rijal Alma’s architecture did not only focus on beauty. Instead, it was built with a social and humanitarian purpose, with families living in multi-story structures. As a result, this reflects the local society’s ideals.

In addition, several defensive watchtowers on the hillside were historically placed to offer the best possible field of view and firing range.

Take a trip to the Rijal Almaa Museum

The largest fort in the region, Al Elwan Fort, was constructed by the Al Elwan family as a foundation in the village of Rijal Alma. It was selected as the Rijal Alma Museum’s permanent location in 1405 AH/1985 AD as part of a larger effort by the province’s citizens to preserve their local history. Each community member contributed their skills and knowledge to the fort’s renovation as a team. To beautify the fort, the village ladies worked with local artist Fatima Ali Abu Qahhas. Most of these artifacts are kept at the museum and are on exhibit for visitors to admire and explore.

One of the first tourist attractions is the Qasabat Al-Owusu Tower, which has a surface area of around 26 square meters. Typically, site visitors climb to the tower’s top to take in the magnificent views from a high height.

The ancient Ash-Shorfa Mountain is one of the most well-known tourist attractions in the region. Visitors may get to the mountain through the Jabal Soudah cable cars that go to the Awus Valley. The verdant agricultural terraces resemble wonderful works of art and are a lovely sight for visitors.

The tallest peak in Saudi Arabia is Jabal Soudah. Tourists go on the easy track to test their hiking prowess and soak in the stunning vistas. At the peak, visitors can also set up their tent and spend the night mingling around a campfire and a grill.

How To Reach Rijal Alma

Road access from Abha to the settlement of Rijal Alma is provided via Aqabat Sama.

The Rijal Almaa Traditional Village in Assir was constructed by the men of this area, who used their labor to conserve the local tradition and gather it in one of the fortresses of this grand village. It is a superb illustration of a typical human settlement that has been properly fitted to its surroundings and to its social and economic purposes. 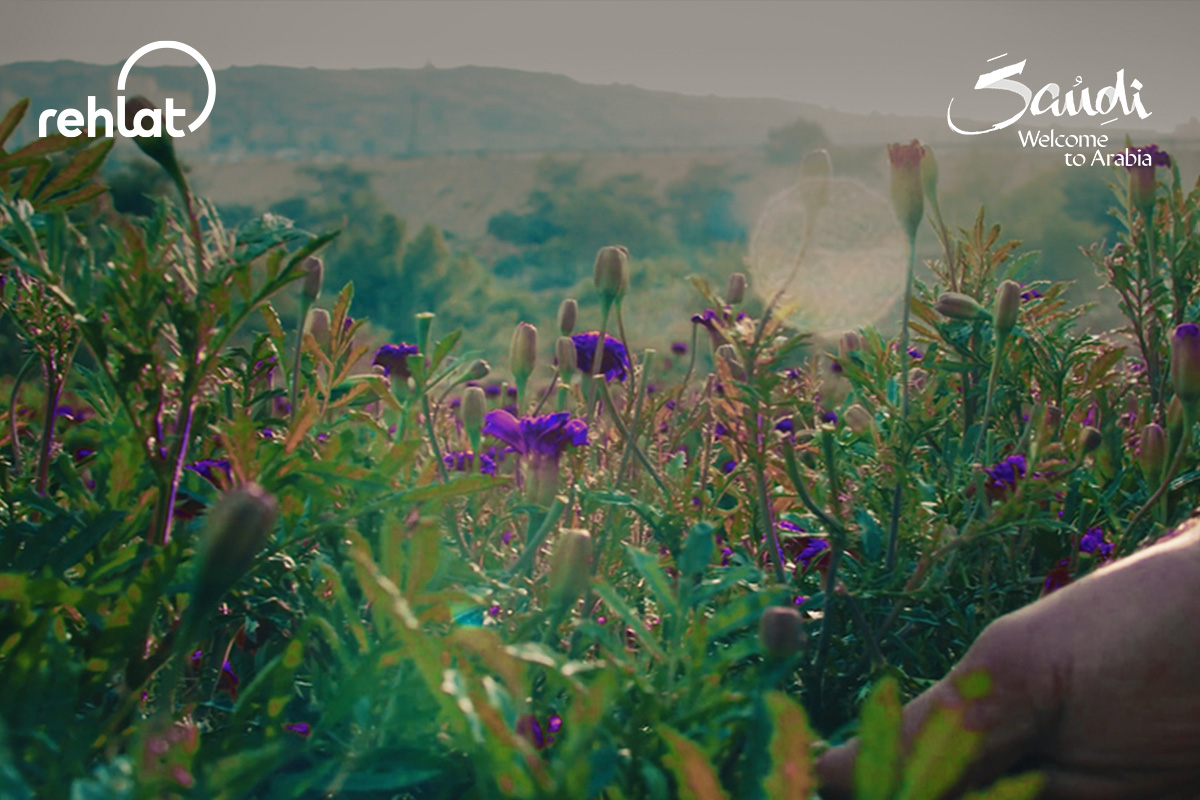 Celebrating the beauty of these flowers!

The historic settlement and the surrounding terrain, which was sculpted by land usage, along with the fortress, which arranges and orientates the area’s vista, create a pleasing and complete entity from a visual standpoint.

If you are looking for your next summer holiday spot, Saudi Arabia should be your pick! Use Rehlat’s special flight offer to save up to 25 USD on flights to the Kingdom. Use code: SAUDI while booking. Also, get up to 12% off on hotels in Saudi Arabia with code: STAY12