Ha’il: An Essence of Saudi Arabia

In the northwest of Saudi Arabia is the oasis city of Ha’il. It serves as both the province’s capital and major city. Ha’il’s historical richness comes from its location along the Hajj camel caravan route. A resident of Ha’il, Hatim al-Tai, was widely renowned for its generous residents throughout Saudi Arabia and the Arab world. The Rashid royal family also calls it home. The most famous and influential families of Saudi Arabia reside in Ha’il.

Another reason why Ha’il is considered an integral part of Saudi Arabia is because of its grain, date, and fruit production. A significant contribution of wheat to the Kingdom comes from Ha’il.

From 1836 until Saudi Arabia conquered the Emirate of Jabal Shammar in 1921, the city of Ha’il served as its capital. The House of Rashid ruled the emirate as a monarchy. Numerous foreigners visited Ha’il and the Rashidi emirs throughout the Rashidi period and wrote about their experiences regarding the beauty of the culture and surroundings in various periodicals and publications. All these reasons have added to its popularity as a tourist destination of history, shopping, and natural beauty. 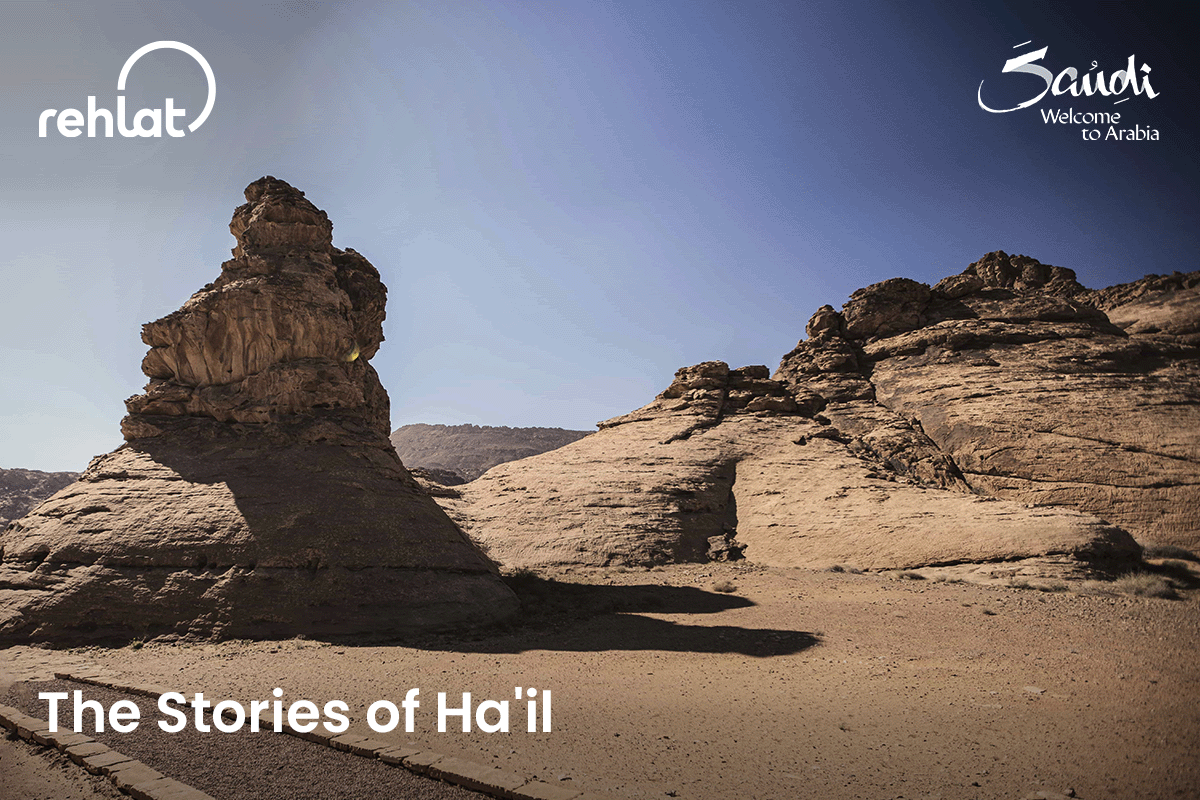 The famed Hatim al-Tai kindled a fire at the peak of As-Samra Mountain from where the city is visible. The mountain is now accessible by an asphalt road, and a fire powered by natural gas is lit at night. The mountain’s base is home to a park with a lake, and its side is adorned with the Saudi Arabian flag’s date palm and crossed swords, illuminated at night by electric lights.

The Ha’il province is home to several rock art locations. Jabal Umm Sinman near Jubbah and Jabal al-Manjur are two locations that have been included on the UNESCO World Cultural Heritage Site List. Discover the 7,000-year-old sculptures of humans, dogs, and long-horned buffalo in Jubbah’s ancient rock art. The Ha’il Museum sells admission tickets for these locations. There are several historic forts and castles in the area, particularly in and around Ha’il, the region’s capital. Sandstone formations like the Nafud al-Kabir are another important location in the area.

In the heart of Ha’il, there is a large old mud-brick structure known as At-Turathy Restaurant, which serves as a conventional dining establishment. It is a hybrid place with a restaurant and a museum embellished by regional décor. The cuisine is traditional, the ambiance is traditional, and there is on-floor seating.

There are several Ha’il Roundabouts spread across the city. In the middle of the traffic, rotaries are magnificent fountains with enormous sculptures of traditional objects. Another has a Mabakara (traditional incense burner) with Dellahs (traditional coffee pots) and cups surrounding it, made as a fountain. One has a Gerba (traditional animal hide canteen) built as a fountain.

The Greatness of Al-Nafud Desert

Al-Nafud, covering most of the Arabian Desert region, is located in northern Saudi Arabia. The sandy, reddish Al-Nafud is frequently referred to as the Great Nafud. Only the enormous Rub al-Khali Desert to the south is larger in size than it, making it the second biggest sandy area in the Arabian Desert.

Numerous Arabian stories and traditions have their origins in the desert, giving the area a mysterious allure. An ancient caravan road connects the oasis of Al-Jawf and Ha’il from the northwest to the southeast. Al-Nafud provides a variety of beautiful settings amid the alluring Arabian countries. The Jubbah World Heritage Site is also located there.

Although Al-Nafud is mostly desolate, occasional green spots and drinking water wells allow for cultivation and nomadic herding. Travel has been difficult in the desert for centuries due to the enormous shifting dunes and frequent sandstorms. Only once or twice a year does the desert get any rain. Otherwise, the air is dry for most of the year.

Animals like wildcats, jackals, hyenas, gazelles, lizards, and scurrying rodents can be found in the desert. The indigenous tribe of this desert is called Shammar Bedouin. They live in the southeast region of this desert and take advantage of the local meadows and wells. Adventures you can do in this desert are:

The Ha’il Museum is called the Jubbah Palace of Heritage museum and is one of the top tourist destinations on the Ha’il Tourism list. It is located off the main street in the town of Jubbah. It is also where you may get permits to visit the petroglyphs close to the Jubbah Oasis.

The majestic Qishlah Fortress is situated in the heart of Ha’il. While Prince Abdulaziz bin Musa’ad Al Saud served as governor of the province of Ha’il, the current structure was constructed in the 1940s. The most extensive conventional mud-brick fortification in Ha’il, it is very well maintained both inside and out. It was mostly utilized as a barracks. Its walls are 8.5 meters high, and its two levels are 142.8 by 141.2 meters high. Along with the wall and two main gates on the eastern and western sides, it contains eight significant watchtowers. It also includes a massive interior courtyard where vintage military relics are on display.

It is a historical city situated 110 km east of Ha’il. It is regarded as a historical, archaeological site because its mountains contain historical inscriptions from prehistoric times. Ha’il is one of the most important stops on the Zubaydah trail because it is situated halfway between Mecca and Baghdad. Ha’il Tourism has ranked this location as one of the best locations to visit in Ha’il.

The Abbasid Caliphate is significant historically and is home to several Islamic monuments. The residential city, the basements, the hillside area, the palace’s Faqiyyah, the enormous mill for grinding grains, 45 wells, and water conduits are among the most significant structures in the city of Fayd. The city’s origins may be traced to the early Islamic periods. Additionally, it was recently revealed that Fayd, a historic city, has been transformed into a tourist destination because of the historical beauty it holds.

75 kilometers northeast of Ha’il is Janin Mountain and the cave that houses it. This popular destination is home to one of Ha’il’s oldest ancient caves, where humans lived before recorded history. It is a huge mountain that is situated in the center of Janin’s groundwater-rich lake. It is distinguished by a big cave, about 100 meters long, where ancient Thamudic and Abyssinian writings are scattered throughout the mountain rocks. Ha’il tourism promotes the mountain as a tourist destination because of its historical value.

Additionally, the cave’s walls are covered in various plastic paintings and other writings that express their topics, arrangements, and constituent parts. You may witness the numerous sculptures and works of art that have been uncovered using different excavation methods, such as conspicuous drilling and discharge. The carvings and paintings on the mountain depict ancient people’s everyday activities and surroundings.

On the city outskirts, you may spot Aarif Fort (sometimes written Oreif). It is a mud-brick (adobe) fort constructed over 200 years ago as a fortress and was later considered an observation post. The main watchtower offers a stunning perspective of the city.

Malls and Souq Shopping in Ha’il

Hail’s Malls are the best place to go shopping for the most well-known brands in the world. In these malls, you may buy fashion items, fragrances, gadgets, souvenirs, etc.. You may engage in traditional shopping at the city’s historic marketplaces in addition to these malls. Here’s the list of places where you can shop to your heart’s content:

Rehlat has all the conveniently located Ha’il hotels listed on the website, making it easy for you to explore all the deals on hotel bookings. These hotels have world-class facilities and rooms for a luxurious and comfortable stay.  Some of these popular hotels are:

You can count on a buffet of classic foods prepared in traditional fashion when you visit Hai’il. In addition to providing warm hospitality, Ha’il also provides a comprehensive variety of family recipes that have been passed down to generations, along with a long and rich culinary expertise.

Here’s a list of famous restaurants in Ha’il that serve both traditional and international cuisines in Ha’il:

If you are looking for your next summer holiday spot, Saudi Arabia should be your pick! Book your flight tickets with us to get the best deals. Use Rehlat’s special flight offer to save up to 25 USD on flights to the Kingdom. Use code: SAUDI while booking your tickets. Also, get up to 12% off on hotels in Saudi Arabia with code: STAY12.

While you explore the hidden gems of Saudi Arabia, don’t miss out on the capital city’s biggest gala Riyadh Season 2022. Know all about Riyadh Season’s events and purchase your tickets on our platform.