Riyadh, named and famed as the capital city of Saudi Arabia, is a fascinating city with a rich history that dates back centuries. Riyadh was also named Hajr, formerly a humble oasis village. It is today one of the wealthiest cities in the world thanks to its history of serving as a detour for ancient traders traversing the huge deserts of Arabia. The history of Saudi Arabia’s capital is filled with heroic deeds, the rise and collapse of mighty empires, the discovery of black gold, unbelievable wealth, and World heritage sites. Exploring Riyadh is not complete without viewing its geological wonders in its deserts, breath-taking natural features, quaint mud settlements, and expansive panoramas — all within a day trip’s drive. An intriguing architectural narrative explains how this once-small oasis in the desert grew to become one of the world’s greatest capitals.

While you explore the hidden gems of Saudi Arabia, don’t miss out on the capital city’s biggest gala Riyadh Season 2022. Know all about Riyadh Season’s events and purchase your tickets on our platform.

Aren’t you on the edge of your seat reading this? Book your flights to Saudi Arabia now on Rehlat. 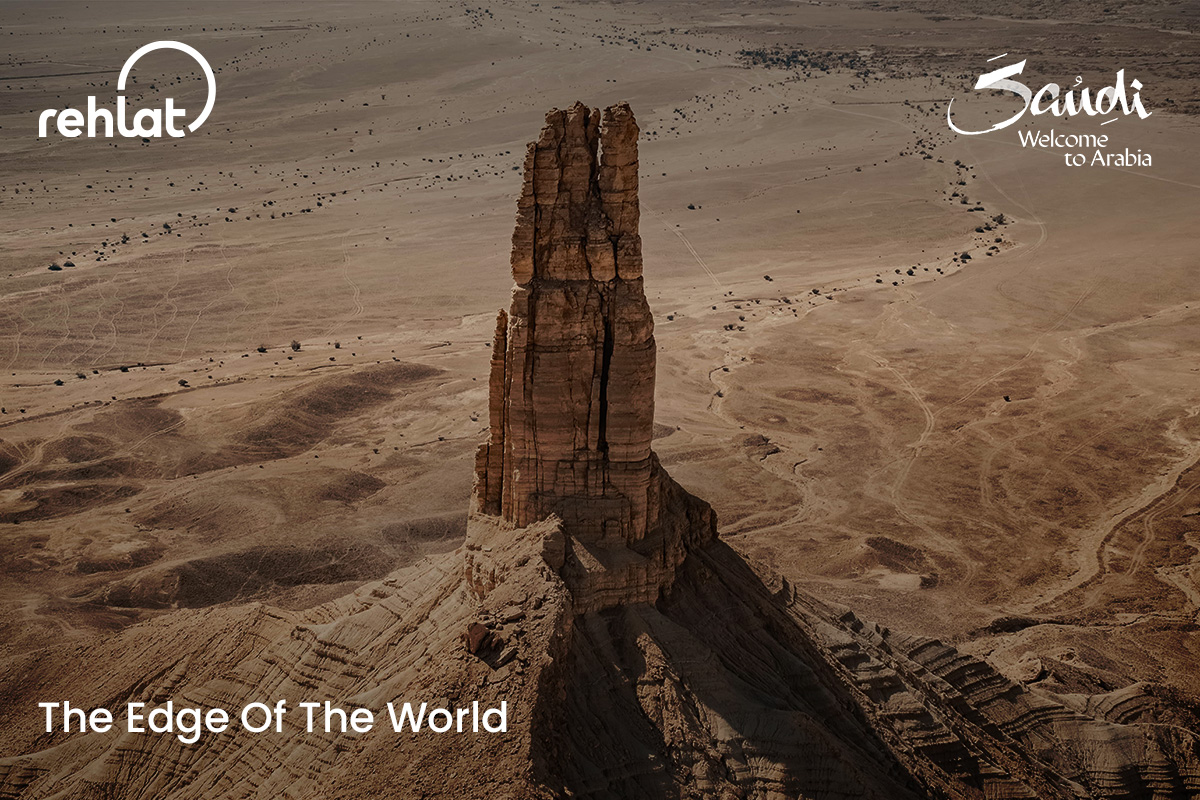 Let us enlighten you about The Edge of the World Riyadh, a geological marvel located in the stony desert to the northwest of Riyadh. On the outskirts of Riyadh, this is one of the most recognizable landmarks in the country. It is a spot to relax and take in the sights of Riyadh ditching the crowds. You may find the ideal combination of sea and cliffs here.

The Edge of the World Riyadh, also known as Jebel Fihrayn, is an awe-inspiring and spectacular sight for any tourist visiting the city. Looking back at Mount Fihrayn from the city, you will see that it actually has two peaks. Hence, it is also known as the Mountain with Two Heads.

The Story behind the Formation of the Dramatic Cliffs

The moniker “Edge of the World” comes from the expansive horizon seen from its towering cliffs. It is 305 meters into an ancient seabed and forms a section of the much longer Tuwaiq escarpment. Hundreds of Riyadhians eager for a weekend desert escape will join you at a spot known as the Red Sands. This spot is set against the dramatic background of the Tuwaiq Mountains.

A historic caravan route formerly ran through this area, and if you climb to the top of the cliffs, you may look down and see dried rivers winding through the country and maybe even see camels moving far below.

The cliffs were formed when the Arabian plate moved northeast as a result of the expansion of the Red Sea rift, which is located about a thousand kilometers to the west of the Tuwaiq escarpment. The clear incision it made exposes sedimentary strata that formed when the eastern section of the Arabian Peninsula was a shallow and trivial tropical sea during the Jurassic period (around 150 million years ago).

A network of hiking routes surrounds the cliffs. A place called “the window” provides access to the lower plateau below. Be aware of the fossils as you sift through the pebbles and examine the rocks. Take pictures of any fossils you come across while taking shots of the scenery because you cannot take them with you.

Traverse the Edge of the World

Once you reach this destination, a flood of emotions erupt, from enthusiasm to contentment. If you get past the gates, you will reach the Sha’ib Kharmah, a vast valley that is perfect for a picnic during the rainy season. About 15 kilometers westward, the valley ends at the base of the towering cliffs that form the so-called “Edge of the World.” Here is the list of things to do when you reach there: 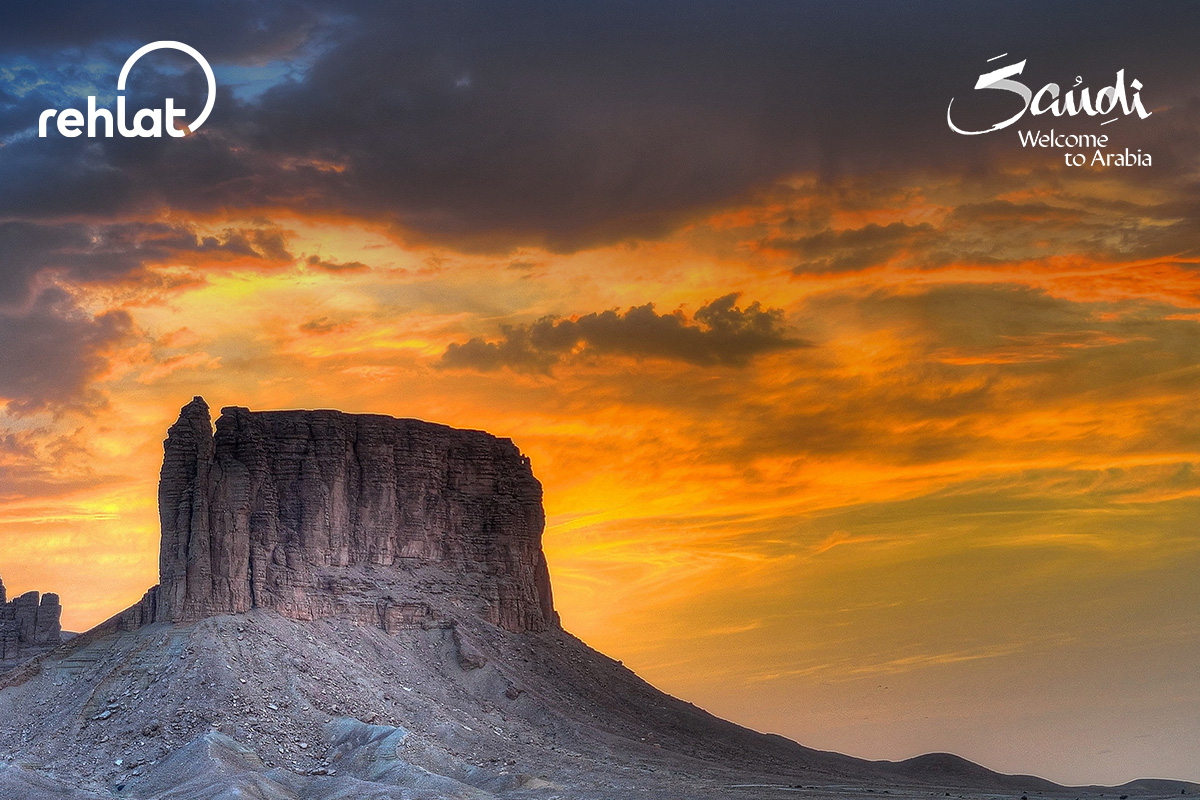 Out of the World view!

Reach to the Edge of the World Riyadh

The massiveness of this place is perched on a cliff overlooking a wide valley along the Al-Khobar road and there are two routes open for traveling. However, it’s important to note that access to the most well-known route through Acacia Valley is restricted to the weekend. The route around the Sadus Dam is always accessible. Both routes have rocky roads, making travel difficult for vehicles with low ground clearance.

There are not many landmarks or markers on the Google Maps route, but the GPS will get you there just fine. Traveling takes about 1 hour 30 minutes to drive to Edge of the World Riyadh by car. To explore the desert on your own, you will need a capable 4×4 vehicle, or you can hire a guide. Many trails lead to the summit, but all require sturdy footwear due to the rough terrain, steep inclines, and jagged rocks along the way.

You can also take a guided tour instead of exploring on your own, to get rid of any stress over finding your way. A guide will be able to point out the most efficient path and you may take in the sights of Mount Fihrayn from the path you choose.

Day trippers have a number of accommodation alternatives in Riyadh, although camping at the World’s End is a popular choice. Both of those aforementioned paths are accessible by car.

For those who are fascinated about experiencing the exterior of Saudi Arabia and spend time hiking to take in mesmerizing vistas, Edge of the World Riyadh should be your pick!

Book your flight tickets from Riyadh because booking is just a simple clickable task on Use Rehlat’s special flight offer to save up to 25 USD on flights to the Kingdom. Use code: SAUDI while booking. Also, get up to 12% off on hotels in Saudi Arabia with code: STAY12.