Football fever is on; by now, all football lovers are planning to go to Qatar to watch these matches. Besides being a football fan, if you are a travel buff too, we recommend you to visit Saudi Arabia, an ideal place near Qatar to fulfill two aspirations in one trip – footballing and holidaying! Many famous landmarks, scenic areas, historical sites, and delectable eateries are in Saudi Arabia to welcome you! Traveling to this part of the world is going to be an unforgettable experience for sure. Discover Saudi from its archeological adventures to world class fine dining. 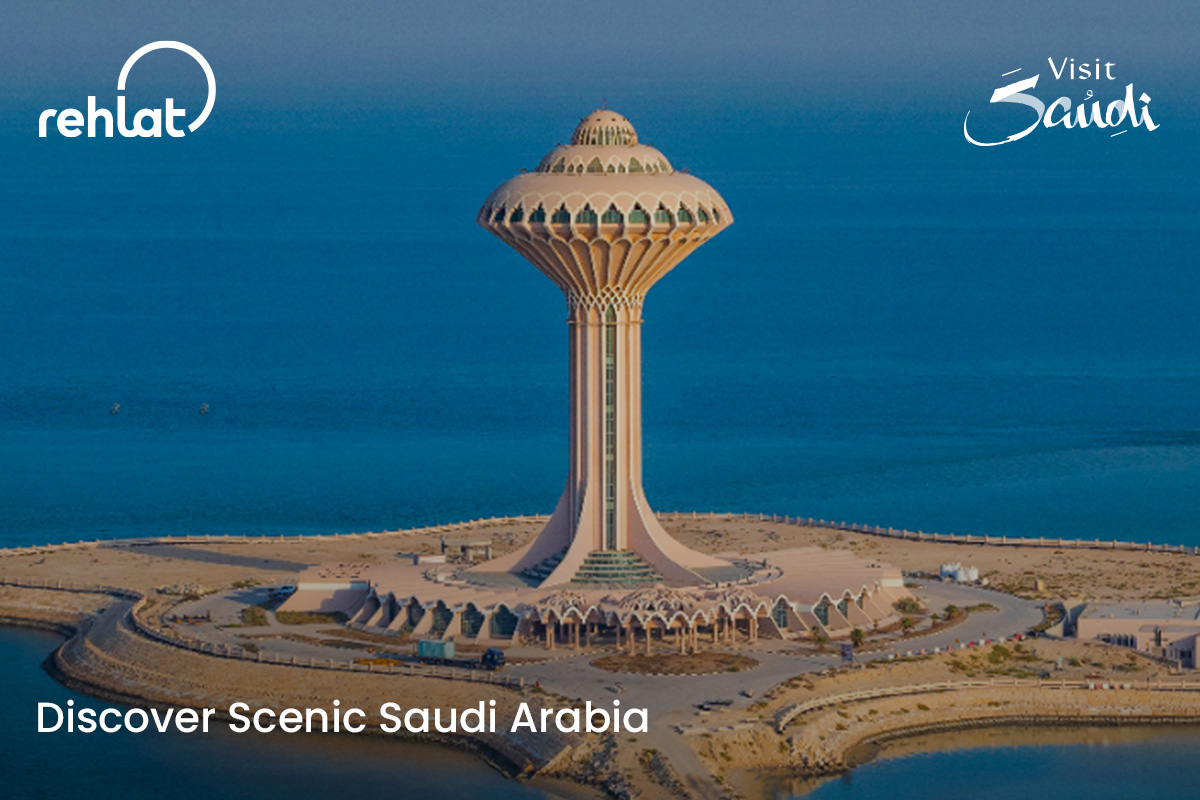 Both Makkah and Medina are located in Saudi Arabia, but a pilgrimage route need not begin and end there. If visitors want to experience the tranquility of the mosques or have some quiet time to pray, they can go to one of the many other holy places that tend to be less crowded. Visiting one of the country’s many architecturally significant mosques and historic buildings is possible to get an up-close look at Saudi Arabia’s unique religious roots.

The Grand Mosque of Riyadh is among the city’s most significant Islamic landmarks. This mosque serves as both a place of worship and a gathering place for the local community, with space for up to 18,000 men in the men’s hall and 2,500 women in the women’s area. On Fridays, prayers are interpreted into seven languages and shown live on digital screens for the deaf community.

The Al Rajhi Mosque, located on the outskirts of Ha’il, is an impressive mosque. It is decorated with four pencil-thin minarets that soar to an impressive height of 80 meters. The interior is a soothing cream color and features one of the largest chandeliers the world has ever seen. This chandelier stands atop a cascading fifty vermillion red domes. The mosque has space for 4,000 worshippers inside and another 3,000 in the tranquil courtyard.

The Al Rahma Mosque, also known as the Floating Mosque, is the world’s first mosque to be constructed on a floating platform in a body of water. A massive turquoise dome is surrounded by 56 colorful windows and Quranic verses written in swirling Arabic script. The mosque’s exterior is constructed of gleaming white marble.

The ancient Jawatha Mosque, said to be the oldest mosque in the eastern Arabian Peninsula, was erected around the time the Islamic religion was first established nearly 1,400 years ago. At first glance, Jawatha Mosque looks more like a fortress than a mosque due to its simple, sand-colored mudbrick walls and surrounding squat towers topped with circular crenellations.

Al Balad and Ha’il: Where a beautiful past is depicted in

Stroll leisurely through Jeddah’s historic district, Al Balad. Hear the commotion of its street vendors. Shopping for authentic Arabian cuisine, spices, and trinkets has never been easier than at one of these marketplaces. To really appreciate this city’s ancient beauty and everything it offers, you will likely need to return for a second visit. To know more about this ancient city, click here.

Ha’il is a province with a rich history of pre-Islamic rock art. The history of Saudi Arabia, as recorded in Ha’il spans about ten thousand years. The scale and detail of the tombs of Mada’in Saleh will astound you. To know more about the beauty of Ha’il, click here.

Riyadh: Where the present day admires the splendor of the past

The capital city of Riyadh is home to two of Saudi Arabia’s most stunning attractions. Take a trip to the ruins of Diriyah in Wadi Hanifa. Adobe homes and the outdoor museum are beautiful to look at.

Another tourist site is the breathtaking canyon, the Edge of the World. It is, without a second doubt, one of the country’s most well-known tourist hotspots. If you enjoy hiking and stunning landscapes, you should not miss out on a chance to visit the edge of the world. For more details on this place, please read the blog here.

KAEC: Where the future looks most promising

Makkah province is home to the futuristic city known as King Abdullah Economic City (KAEC). It is ideal for a family staycation thanks to its picturesque villas and condos, lush landscaping, and wide range of fun things to do. Notable features include:

Saudi Arabia is located on the Red Sea and has several beaches. Most of these shores have yet to be explored, and travel by water is available from cities like Yanbu, Al-lith, and Jeddah. A few ancient shipwrecks may still have their relics visible.

There is a stunning coastline drive a few hours to the west of Medina – the port of Yanbu, which is actually split between two cities. The old northern town is an ancient spice route, whereas the southern new city is famous for its oil refineries and industrial plants. Most of the nightlife and historical sites are clustered around the waterfront.

Overlooking the Red Sea, dine with locals on freshly caught fish. Explore the reconstructed alleyways of the adjoining Souq Al Lail (night market), which first opened late to serve fishermen. Fresh Mulkhiah leaves and local dates are only two examples of the delicious fruits and vegetables on offer.

Yanbu’s warm, lush seas offer some of the best diving destinations in Saudi Arabia. Abu Galawa is a beautiful island surrounded by sharks, coral grottoes, and schools of barracuda. The wreck of the SS Iona is now a beautiful living reef and an all-popular destination. Seven Sisters is best known for its hammerhead sharks, though tiger sharks and tuna can often be seen around the walls of coral as well. To know more about the water adventures done in Yanbu, click here.

Water Adventures at the Red Sea

The temperature of the Red Sea here never goes below 20 degrees Celsius, not even in the dead of winter. If you wish to go scuba diving in the Red Sea, you will come across sharks, turtles, beautiful fish, and even moray eels. Furthermore, the Gulf Coast and the Red Sea are both excellent places to go birdwatching.

Even if you have not heard, Saudi Arabia has a wide variety of ecosystems. There are magnificent beaches and mountains, but the rest of the land is desert. There are few places left as pristine as the Mountains of Aseer. Species such as the baboon, eagle, and blue lizard make their homes in the deep and magnificent ravines of these mountains located in the southwestern part of the country. You should visit Aseer if you need to get away to the highlands for some serenity and purity of air.

Foodies will find something about Saudi Arabia particularly charming. One of the world’s most popular and admired cuisines is Arabic cuisine. One of the ideal ways to truly immerse yourself in Arabian culture is to eat the local cuisine. Jeddah is known as the culinary hotspot of Saudi Arabia. Check out the details here to know which are the best places to go in Jeddah.

The exotic flavors of Arabian cuisine come from the use of a wide variety of spices. Middle Eastern staples like hummus bi tahini, couscous with chicken, grilled halloumi, and falafels may be found on the menus of most Arabian eateries in the country. The most prevalent kinds of meat are chicken and lamb.

Riyadh and Jeddah are the most progressive metropolis in Saudi Arabia and a major port and commercial center. These are a must-visit if you are looking for a shopping place.

Dates can be purchased at the Date souk off of Riyadh’s Exit 14 for the best selection. Ajwa, Majdoul, zahidi, saghai, and khudri are just some of the rare and exotic options available to you.

Oud is one of the most sensuous perfumes, and it is often formulated to have a calming effect when used for significant and lavish events. Riyadh’s souk Al Zal is a maze of alleys selling everything from spices to fragrances flavored with oud.

The Kingdom of Saudi Arabia is a destination you can not miss if you value visiting countries with fascinating cultures, deep spiritual traditions, beautiful beaches, and diverse topography. We hope you find our idea of holidaying and footballing an exciting mix. Make Saudi Arabia your best stopover place to visit near Qatar in between the matches. With Rehlat’s deals, this plan can be made budget-friendly too.

Rehlat offers exciting deals on flights and hotel bookings. You can save up to 25 USD on flights to Saudi by using the code: SAUDI and get up to 12% off on hotels in Saudi Arabia by using the Code: STAY12.