Experience The Thrill Of Scuba Diving In Saudi Arabia At Yanbu!

It’s no secret that diving in Saudi Arabia is a penultimate adventure for experienced divers because the Red Sea Coast is one of the world’s most pristine underwater treasure troves. Now, the dive enthusiasts no longer have to reserve the best for last, thanks to Saudi Arabia’s openness to tourists. With the growth of dive shops in cities like Jeddah, Yanbu, and Al Lith, novice and experienced divers now have an equal opportunity to enjoy diving in Saudi Arabia, which is teeming with pristine marine life, shipwrecks, and virgin reefs. This article will let you know more about scuba diving in Yanbu. 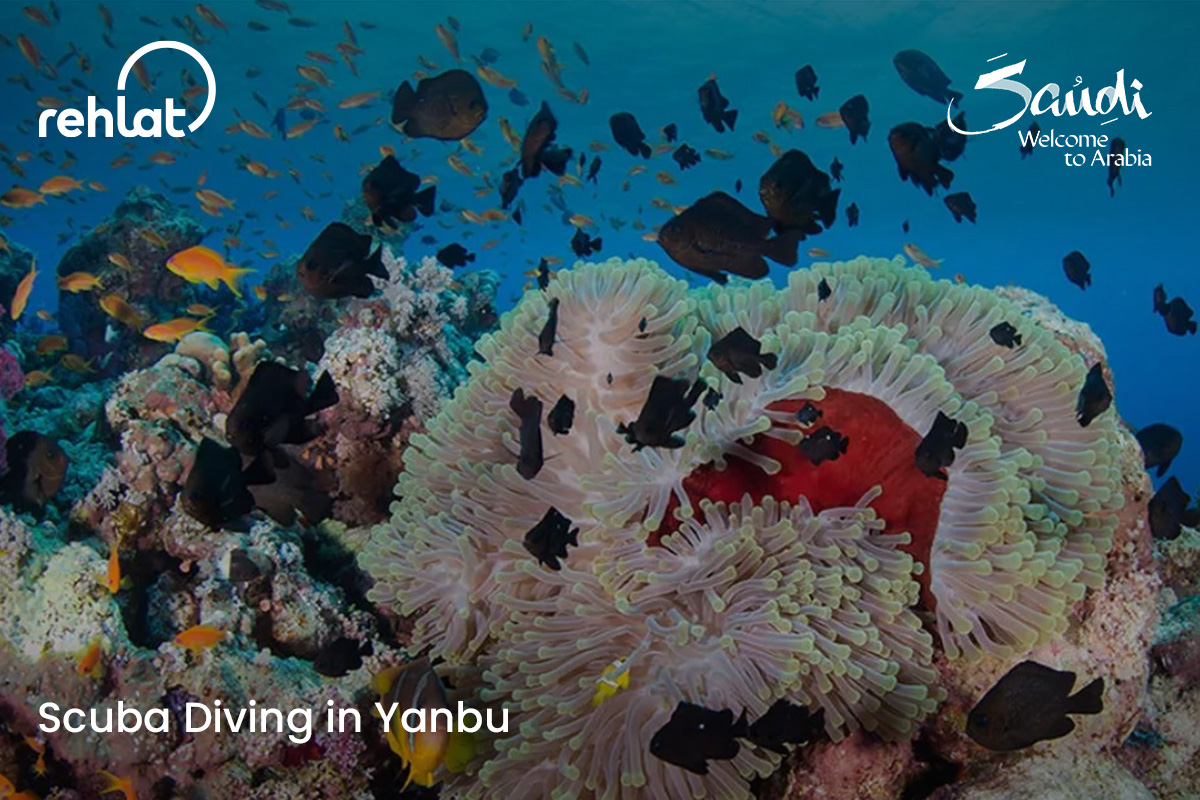 Yanbu is the location to feel the magnificence of the marine; it shouldn’t merely be on your radar for its interesting past. The port city, charmingly referred to as “the Pearl of the Red Sea,” is known as Saudi Arabia’s scuba diving hub. Yanbu offers everything a saltwater enthusiast might desire, including communities of scuba divers, an abundance of underwater riches, and beautiful marine life.

How To Reach Yanbu

The nearest airport in Yanbu is just 8kms away. The Yanbu airport offers both domestic and international services. You can also plan a road trip to Yanbu. From Medina, as Yanbu is only 2 hours away by road.

Here you will find the Black Marlin — the fastest fish in the world with a speed of 109 km/h, as well as the endangered Napoleon fish, better known as “Queen of the Coral Reef,” whose front mimics Napoleon’s crown. There are also incredibly diverse groups of up to 1,200 species, all found in the Red Sea.

Going to Yanbu for scuba diving also means going to the sea with least exposure to currents, the highest salinity (35%) and the best for blood circulation. You will also bask in the warmth of the water, which is unavailable in any city in the world, thanks to the fact that the region where the Red Sea is located is known for its sunny climate with an average annual temperature of at least 21° C. 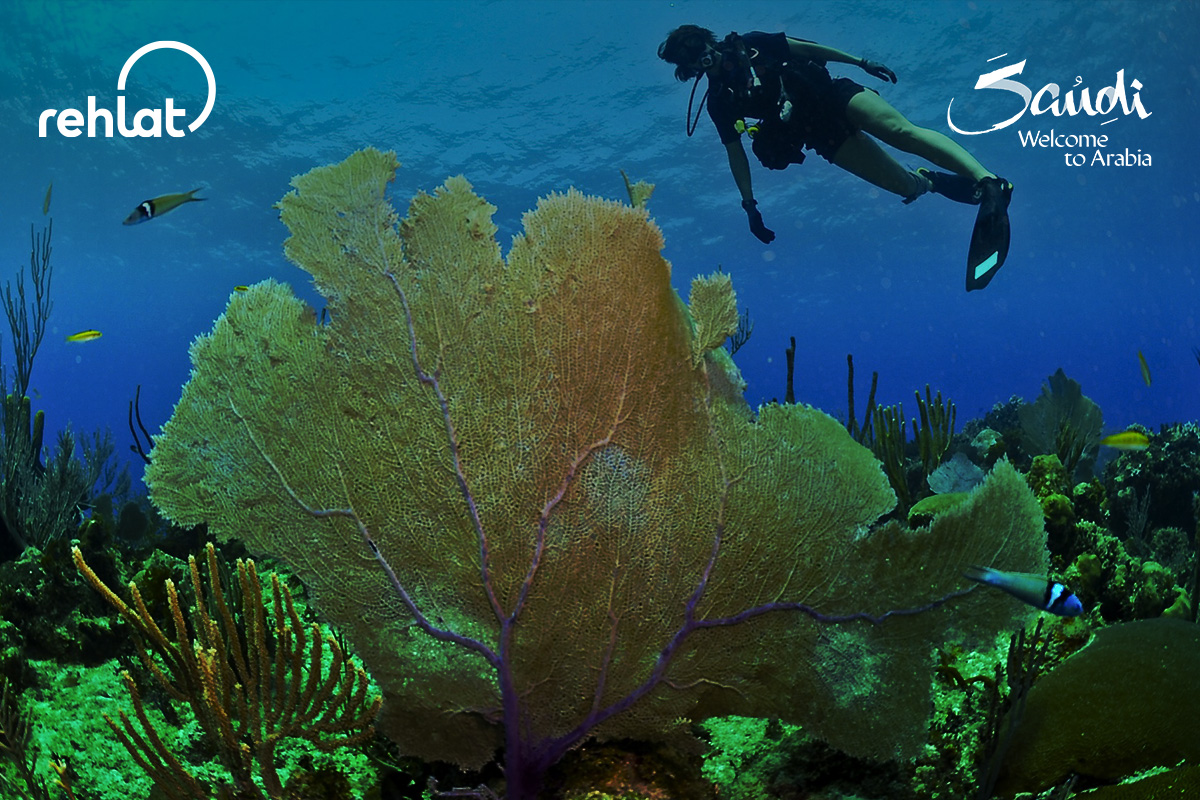 The first and foremost is the Seven Sisters coral reef system, which is well-known for hammerhead shark sightings in Yanbu. Visitors can witness the uncommon hammerhead sharks in Markers No. 32, 39, and 41.

Behind a massive, towering reef wall, coral fields spread like a global underwater scene of hues. Since these pinnacles form a great nursery, fish life is abundant here and includes blennies, damsels, butterflies, and barracuda, which is an excellent start for any food chain.

Because you will be diving in shallow, light water just 30 meters from shore and larger species are fairly uncommon, corals and sponges are teeming with squirrelfish, snappers, pick handle barracuda and numerous other fish species. After investigating just one pinnacle, many photographers have returned with a full memory card after scuba diving in Yanbu.

But keep going; there’s more to see than just the Seven Sisters! Another set of pinnacle reefs known as the Fairy Ring can be found just a short swim to the west-northwest; they are not quite huge enough to get their site name, but they are unquestionably stunning enough to merit inclusion in your dive plan.

Did we also add that the ruins of Tank are only a few meters away? Tank is a self-propelled anti-aircraft defence armament system, known as the “Duster.”. The wreck is a fantastic location for technical divers and should not be skipped. 80 metres below the surface, 64 kilometres offshore. The super-tanker split in two and sank. It is now inhabited by soft corals, lime-green whip corals, big fish, and even the occasional ray.

This M42 Duster tank is even an ideal location to make a fish-packed, once-in-a-lifetime safety stop.

One of Yanbu’s most breathtaking diving locations is Abu Galawa, a region of pristine, untouched reefs. The Galawa reef is the ideal location to view the diverse marine life of the Red Sea because it is home to schools of barracuda and roving coral groupers.

A Chinese tugboat known as “Tien Hsing,” which was 34 meters long and sank in 1947, is a World War II wreck located at the location. Naturally, various hard and soft corals have grown there over time. The eastern side of the Galawa reef is a coral grotto with a 20-meter drop fall to the north and south of the cave.

Shallow anchorages provide stunning late-night dives and overnight stays for scuba diving in Yanbu. Swimmers bold enough to venture over the coral reef’s edge and beyond the drop, where the ocean floor abruptly drops, may even encounter hammerhead or tiger sharks.

Some of the popular diving centres near Yanbu are Dolphin Free Divers, Saudi Diving Centers, and Diving Bubbles.

When describing the Saudi Arabian coast, Jacques Cousteau once said, “Life abounds in bank after bank of exuberant coral structures.” A vacation in Saudi Arabia will provide an unforgettable experience in a country that predates time itself. The Red Sea’s longest coastline, at more than 2,000 km, offers divers a wealth of diversity in both its northern and southern regions, making it an emerging haven and uncharted waters for the world’s scuba divers and snorkelers. There are several wrecks, vibrant coral reefs, and exquisite fish life. Saudi is anticipated to become a popular future travel destination for fantastic diving experiences because it has hundreds of untapped potential dive sites. Through the discovery of shipwrecks from the early Islamic era, many undiscovered tales are ready to be told. Discover adventure on the Aiona and Ann Ann wrecks, see whale sharks at Allaith, or capture breath-taking close-ups of the northern shore as you scuba dive in Yanbu.

Saudi Arabia should be your pick if you are looking for your next summer holiday spot. Use Rehlat’s special flight offer to save up to 25 USD on flights to the Kingdom. Use promo code SAUDI while booking. Also, get up to 12% off hotels in Saudi Arabia with code STAY12.