There is so much to learn about the amazing country of Spain, from its stunning beaches to its architectural wonders and unmissable cultural traditions. Travelers might not be aware that Spain has 49 sites and is home to the third-most UNESCO World Heritage Sites worldwide. UNESCO recognizes these places as having exceptional historical, cultural, or scientific importance. The goal is to save and safeguard these locations for future generations to enjoy and appreciate them. 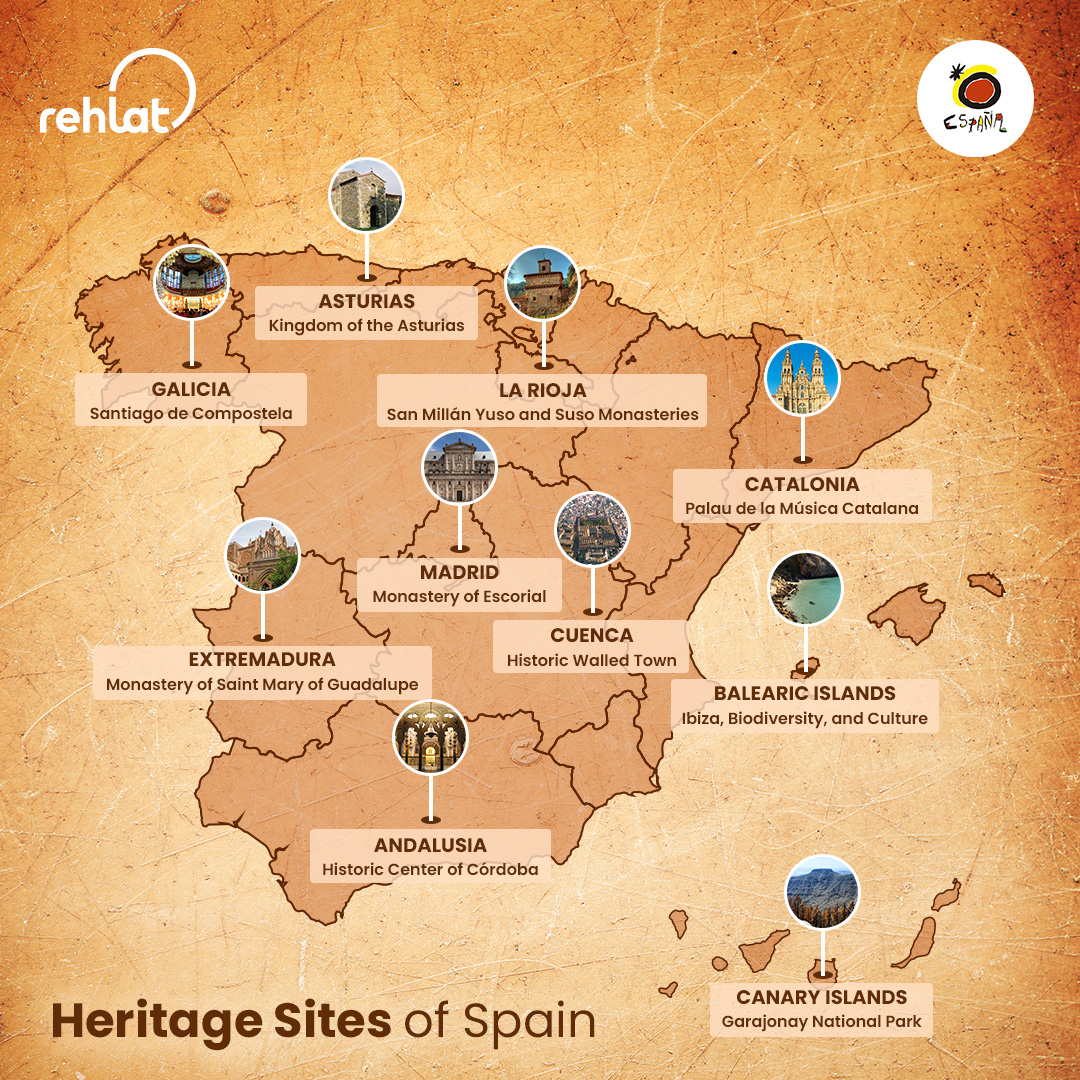 Prehistoric paintings can be found in Altamira, a Paleolithic cave in Santillana del Mar, Cantabrian area, Northern Spain. In addition to Paleolithic cave art, the cave has remnants of the daily activities of the past community as it was occupied for thousands of years.

Three areas can be classified into three sections in the cave:

The area closest to the entrance is where people once resided; archaeologists discovered animal bone fragments and ash from ongoing stoves, confirming human activity in this cave area.

The cave’s interior, where there is no natural light, is where you may find the so-called polychrome or vast room painted in different colors. Aside from the main chamber, there aren’t many large areas in the cave because it’s a small gallery. The entrance and the polychrome room together make up the great hall.

Paleolithic drawings and engravings are in a small, difficult-to-access gallery at the cave’s end.

As an example, the entire ancient town of Cordoba in Andalusia in southern Spain is designated a World Heritage Site. The oldest portion of Cordoba is not very large, making it simple to stroll through magnificent structure after magnificent architecture.

The Great Mosque, or Mezquita in Spanish, is the most well-known monument. The large mosque was built when Islam ruled Spain in the year 784.

A Roman Catholic cathedral was erected within and outside the mosque in the 13th century following the conquest by the Catholic Kings.

Visit the Alcazar of the Christian monarchs, a medieval stronghold built in 1328 with lovely gardens and features of the traditional Mudejar architecture of the South of Spain, by crossing the Guadalquivir River, which runs through Cordoba, on the imposing Roman Bridge.

The result is a stunning combination of Gothic, Baroque, and Renaissance cathedral features coexisting with Moorish columns, arches, decorations, and carvings.

Old Town of Segovia and its Aqueduct

A historic town with an exceptionally well-preserved civil engineering feat from the Roman era, around 50 AD, is Segovia’s Old Town with its Aqueduct. The Alcázar is the ship’s bow, the cathedral tower is the mainmast, and the aqueduct is the helm, giving Segovia its renowned ship-like appearance. It provided water to the town’s high-lying area, which today is home to the Alcázar and was once inhabited by the Roman military headquarters.

It’s an underground passageway that features a free-standing arcade made of 20.000 granite stones that are joined together without using mortar or any other form of adhesive.

Monastery and Site of Escorial

San Lorenzo el Real, a structure that serves multiple purposes, began as a monastery for San Jerónimo monks, whose church served as a royal pantheon. In addition, it features a palace for the monarch and his entourage, a school and seminary to fulfill the monastery’s religious duties, and a library. To some extent, this projection is still in effect today.

The structure that best captures the ideals and aspirations of the Spanish “Golden Age” is the Monastery of El Escorial.

A lavish, interesting woodland that is consistently green and frequently shrouded in mist. The Garajonay Nature Reserve on the Canary Islands is home to this picture-perfect landscape, and its look contrasts with the dry landscapes of the shore and the lower parts of the island. It is located at around 1,200 meters above sea level in the middle plateau of the island of La Gomera.

You’ll learn that this place is an essential natural sanctuary for flora and fauna, with sections that are almost entirely uninhabited by humans. Here, you can locate a variety of rare and indigenous species.

However, the Garajonay Park is unique for another reason. Its flora and fauna are a living reminder of the sub-tropical forests that were formerly common in the Mediterranean region during the Tertiary period, some several million years ago.

Ibiza serves as an exemplary illustration of how marine and coastal ecosystems interact. A variety of marine life can be found in and is supported by the vast prairies of oceanic Posidonia (seagrass), an essential indigenous plant in the Mediterranean basin.

The island played a significant role in the Mediterranean economy, as attested by the archaeological monuments at Sa Caleta (a city) and Puig des Molins (a cemetery).

The ruins of numerous public structures that were the hallmarks of a significant Roman provincial capital are preserved in the Archaeological Ensemble of Mérida. As the provincial capital of Lusitania, the city rose to prominence throughout the Roman Empire.

Its sanctuary is inextricably linked to Guadalupe’s history. The town developed into and is now a significant pilgrimage destination.

The chapel was transformed into the remarkable monastery it is today throughout the following centuries by significant work in the Gothic, Mudejar, Renaissance, Baroque, and Neoclassical styles.

The Monasteries of San Millan Yuso and Suso

Early in the 16th century, the Yuso monastery was built. The Yuso and Suso Monasteries in San Millán are well-known for their contribution to the growth of the Spanish language. The twin monasteries are situated in La Rioja’s San Millán de la Cogolla. ‘Yuso’ means ‘below,’ while ‘Suso’ stands for ‘upper.’ They attribute their existence to the revered figure Millán, who came to this region in the sixth century and established the first monastery there.

Monuments in Oviedo and the Asturian Kingdom

The little Kingdom of Asturias in the Iberian peninsula preserved the Christian light during the ninth century. Here, an inventive pre-Romanesque architectural design was developed that would greatly impact how the ecclesiastical architecture of the peninsula developed.

The churches of Santa Maria del Naranco, San Miguel de Lillo, Santa Cristina de Lena, the Cámara Santa, and San Julián de las Prados, in and around the former capital city of Oviedo, showcase some of its finest accomplishments. The impressive modern La Foncalada hydraulic engineering complex is connected to them.

Santiago de Compostela was a popular pilgrimage destination for numerous travelers from all across Europe during the Middle Ages. The pilgrimage has influenced the secular world by having a significant impact on the creation and dissemination of ideas and art, as well as serving as a spiritual exercise and expression of faith.

In 166 towns and villages, the buildings on the Route include cathedrals, churches, monasteries, hospitals, inns, and public works.

Due to its unique historical setting following the Reconquista in the 12th century, where Christians and Moors coexisted for generations, the Mudejar art is exclusive to Spain. It is a sophisticated fusion of Islamic heritage and European art. Its defining feature is a novel and inventive use of brick and glazed tiles in belfries.

This UNESCO World Heritage Site comprises ten religious and secular structures, such as the parish church of San Pablo de Zaragoza, the Aljafería Palace of Zaragoza, and the church tower and church of San Pedro de Teruel.

Cuenca, a walled medieval city that the Moors built in the center of the Caliphate of Cordoba, is remarkably well preserved. After being taken over by the Castilians in the 12th century, it developed into a royal town and bishopric with several significant structures, including Spain’s earliest Gothic cathedral and the renowned Casas Colgadas (hanging homes) which are perched on steep cliffs above the Huécar River. The city dominates the beautiful countryside, making the most of its situation.

The Palau de la Musica Catalana is a flamboyant steel-framed building with plenty of light and space decorated by several top contemporary designers.

Using several decorative arts, including sculpture, mosaic, stained glass, and ironwork, the modernist structure is built around a core metal framework covered in glass that uses natural light to transform Domenech I Montaner’s masterpiece into a very luminous theater. It is a masterpiece of Catalan Art Nouveau architecture and the only music hall built in this period to be recognized as a UNESCO World Heritage site.

The Hospital de Sant Pau’s architecture and interior design are equally daring and perfectly suited to the needs of the sick.

La Lonja was constructed during the end of the 15th century when the city’s economy was booming to serve as a location for trade and commerce. Since it is a fully remarkable example of secular architecture in the late Gothic style, which dramatically portrays the riches and power of one of the great Mediterranean mercantile cities, being designated as a UNESCO World Heritage Site.

The major core of the building, which is made up of the tower and the Hall of Columns, also known as the Hall of Trade, is where business agreements were made.

The extremely high bar for inclusion on the UNESCO World Heritage List is “best of the best.” A stamp of approval that brings reputation, tourist revenue, public awareness, and, most importantly, a commitment to safeguard the priceless, is attained by Spain, having worked hard to obtain their magnificent buildings, wilderness, and historic ruins on the list.