If you’re visiting Kuala Lumpur and are a big art and culture enthusiast, then the Islamic Arts Museum in Malaysia is a must-visit for being the largest Southeast Asian museum of Islamic arts. It boasts a spectacular collection of over 7,000 artifacts and relics celebrating the marvels that emerged from the Islamic world.

The museum has excelled and surpassed all expectations in curating a collection that is representative of the entirety of the Islamic world, and is divided into gallery sections housing works that represent their geographical origins from India, China and Malay, representing the multi-cultural diversity of Malaysia.

The museum shuns all formal institutional and architectural rigidities through its wide, open and airy floors which rules the design mandate of the museum site spread over 30,000 square meters, and opens onto a white marble courtyard reminiscent of Mughal architecture.

Plan your trip to Kuala Lumpur

The open space design scheme continued and maintained throughout the gallery space lends a fresh, contemporary vibe to the museum and is a unique combination of modern design and traditional Iranian and Central architecture, with magnificent turquoise-colored domes dominating Kuala Lumpur city’s skyline. 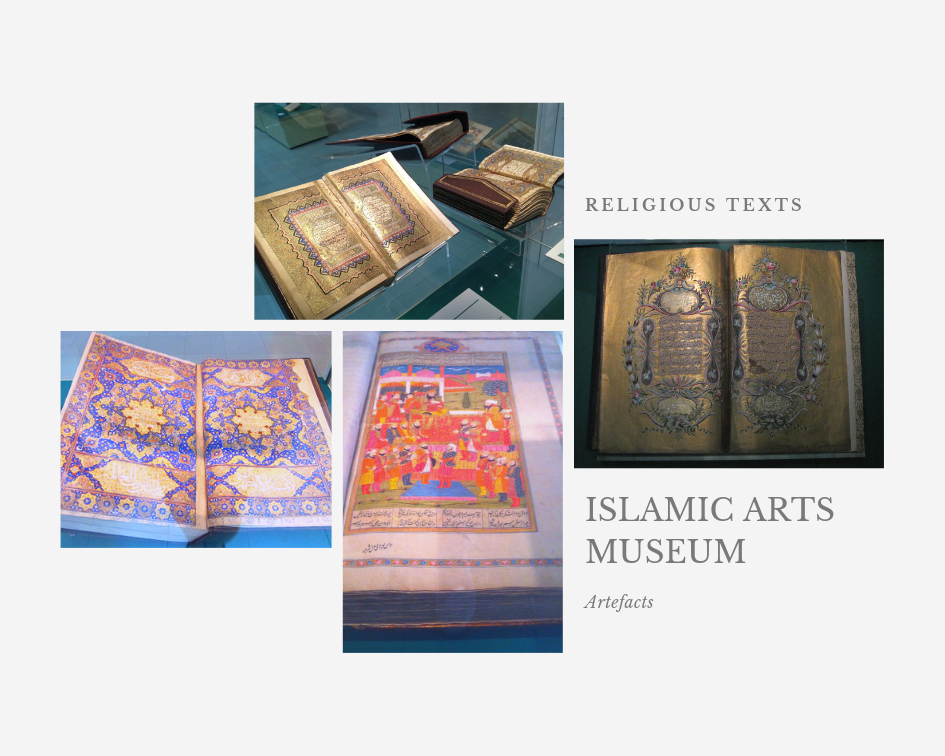 The museum has galleries dedicated to housing precious items and articles according to themes, region, and chronology: arms and armor, ceramics, wood works, textiles, architecture, Quran and manuscripts, jewelry, India, China and Malay world, and coins and seal galleries which occupy two floors; with an additional two floors dedicated to hosting temporary exhibitions.

The India Gallery provides a unique and unprecedented look inside  the private and social lives of Mughals whose reign influenced the social, religious, and political landscape of India, bringing Islamic architecture, art, and music into the fabric of the subcontinent. 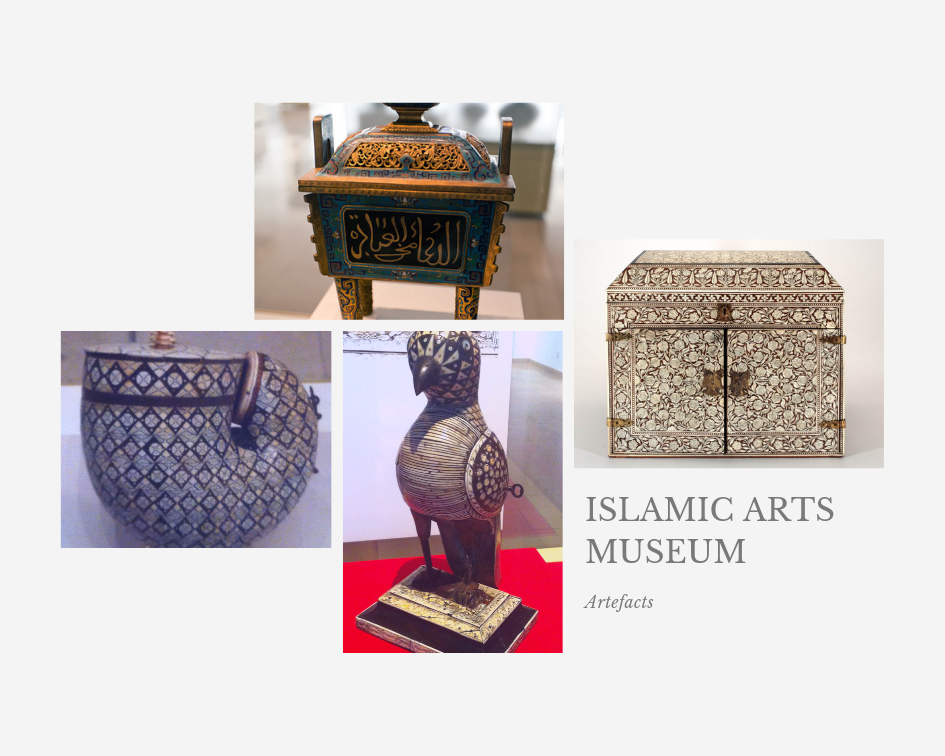 Rare court portraitures of princes and princesses, bejeweled furniture and personal grooming articles, decorative ceramics, metal works, arms and armor provide a stunning look into the life of the Mughal royals and their domestic way of life.

The opulence of Indian jewelry replete with diamonds, rubies, emeralds, pearls, and semi-precious stones; and other trinkets from Central Asia, provide a glimpse into fashion trends prevailing in the tribal and royal circles from the Islamic world. 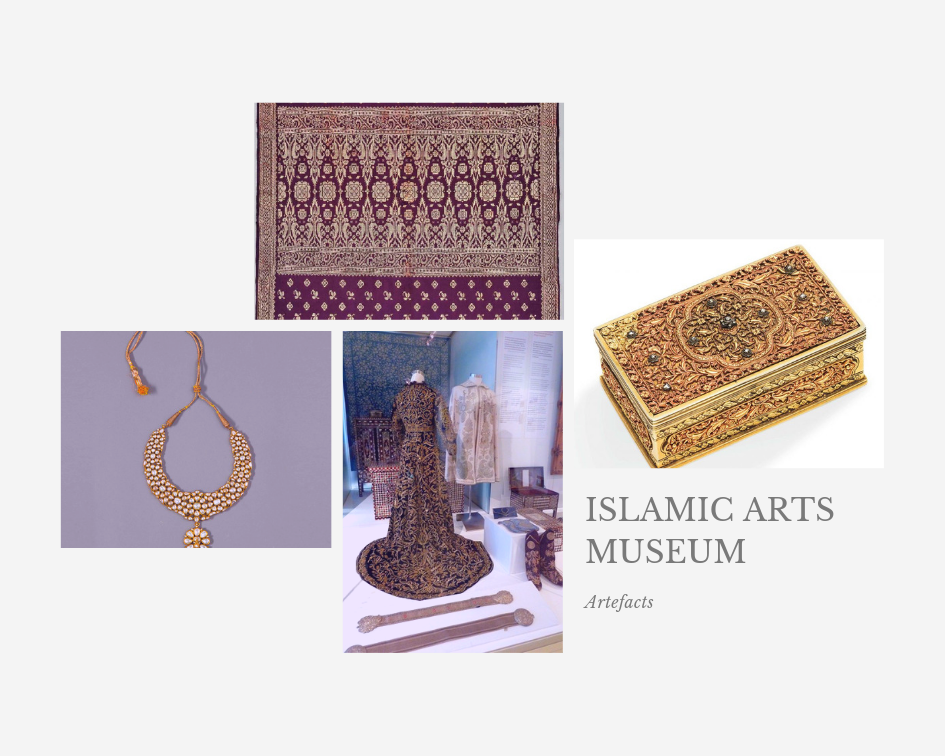 Rare Quran copies and manuscripts dating back as far as the 14th century A.D. and books, scripts and treatises in medicine, mathematics, astronomy and philosophy that added to the academic development of the Islamic world from Kashmir, Persia, Syria, Turkey and Morocco can be found on display.

The Southeast Asian gallery reflects the grand expertise of the artists of the period from 16-18th century A.D. through their calligraphy heavy Quranic art that also drew influence from traditional Chinese writing art forms.

The largest scale model in the world of the Holy Mosque of Mecca can be found here, including the recreation of the interiors of mausoleums of Timur and Amir Albukhari and the understated mosques in China and Southeast Asia. 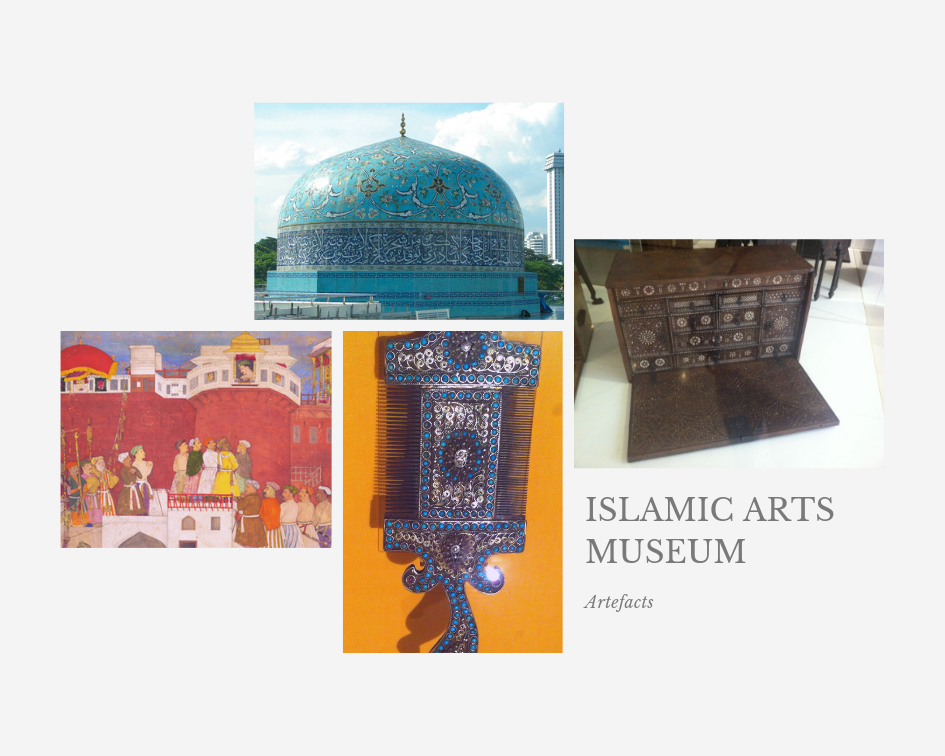 The arms and armor gallery display two major categories of weaponry: firearms and edged weapons. Blades, barrels, swords, daggers, axes, maces and spears show a very high artistic dimension to the art of war through their jeweled beauty and intricate design forms, and mechanical effectiveness through ingenious workmanship used in battle during the reign of the Muslim empire stretching from Asia to Europe.

While I visited the museum this month, I availed the chance to attend their exhibition Qajar Ceramics, which was launched as part of the year-long celebration of IAMM’s 20th anniversary. 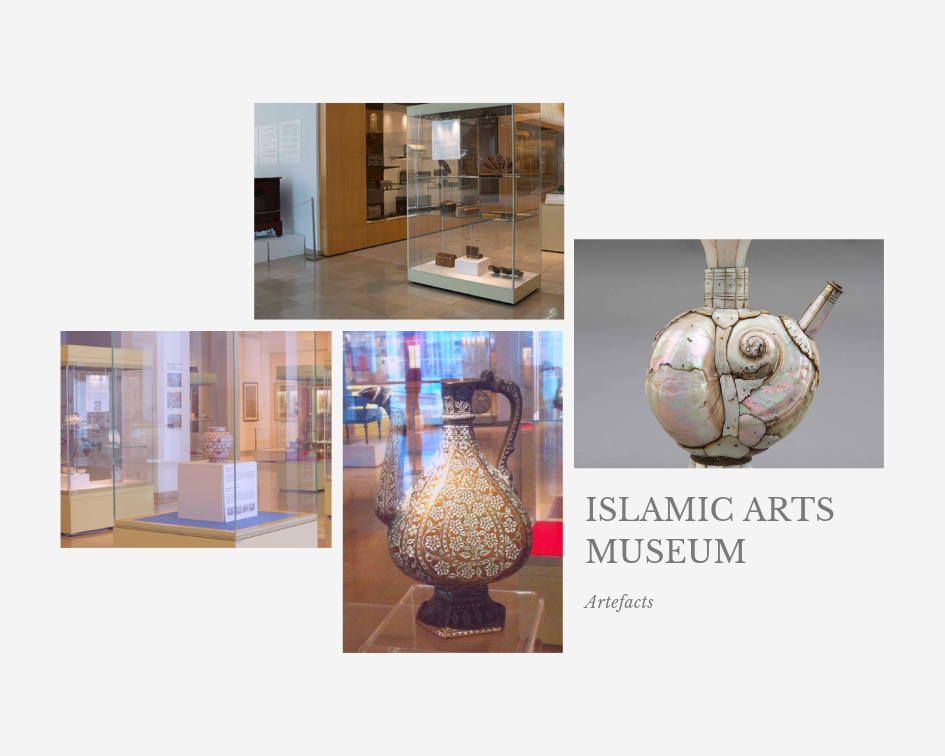 Qajar Ceramics – Bridging Tradition and Modernity is about an artistic transition, featuring a diversity of ceramic objects from the collection of the Islamic Arts Museum Malaysia. The exhibition offers a closer look at the distinctive characteristics of Qajar ceramics, highlighting their forms, aesthetics, and themes. These objects point us to a story of vigour and resilience behind the Persian artistic expression. This rarely-explored field of Qajar ceramics typifies the development of the dynasty’s own language and vitality, reflecting the rich energy of the time. It will be held until 31st December 2019.

Another interesting exhibition running in conjunction is the ‘CONSERVATION: CRAFT OR SCIENCE?’ exhibit that offers a broader perspective of modern conservation practices through a series of case studies featuring selected artefacts from the collection of the Islamic Arts Museum Malaysia. It is open to the public until 31st October 2019.

One can find a very exciting extension to the museum apart from the gallery and exhibits on display which includes a museum restaurant that predominantly serves Middle Eastern cuisine. The restaurant décor runs in parallel to the understated architecture of the museum. The vibe is resplendent with Arabian and Persian elements and decorative motifs and opens onto a soothing Fountain Garden Courtyard outside. 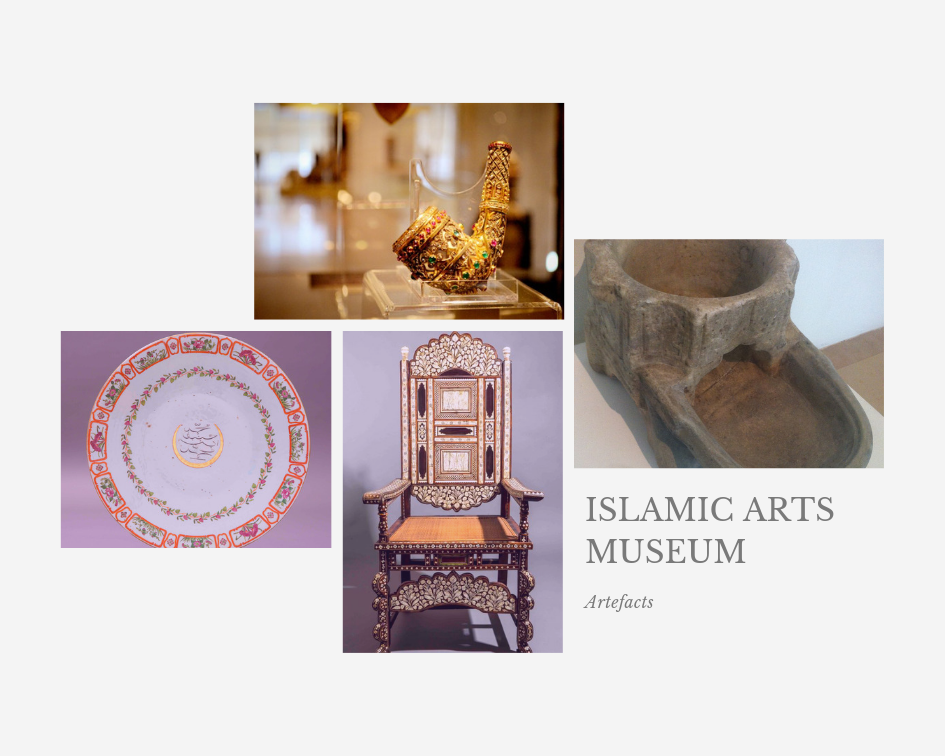 Located on the ground floor is the Museum Shop that offers a unique selection of books, trinkets, postcards, souvenirs, apparel, paintings and other decorative items that are worth a buy. The store is a treasure-trove of exotic finds that is underlined with the theme of promoting Islamic art, from Southeast Asian woodwork for home decoration, to intricate middle-eastern jewelry, and books and writing diaries for the more lit-indulgent. A variety of products exclusively developed by the Islamic Arts Museum Malaysia are also available. 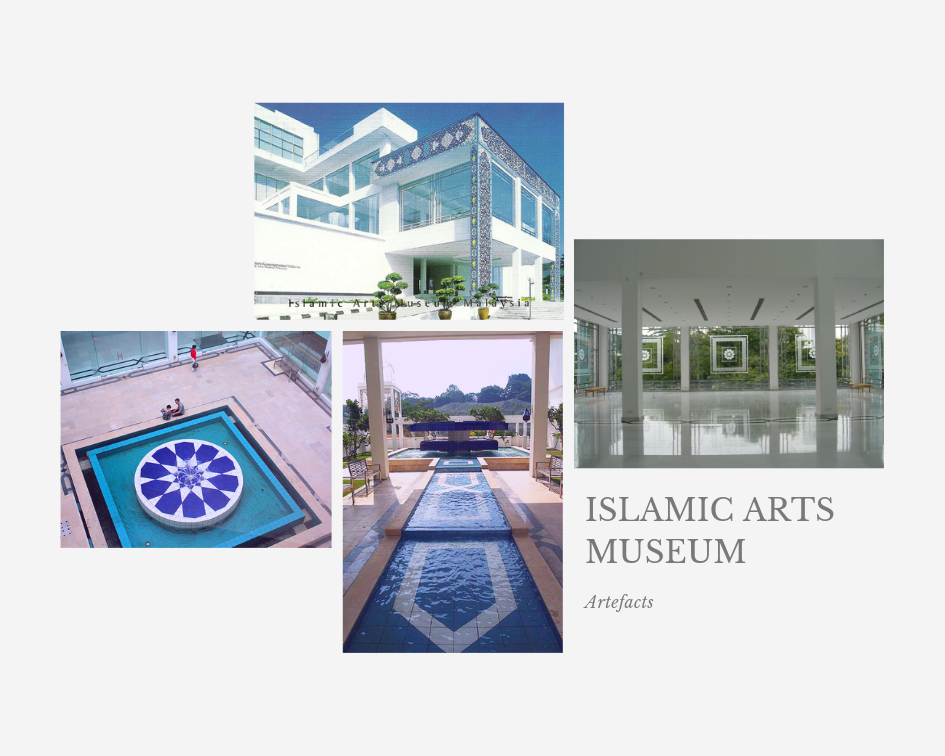 The museum also boasts a view terrace, a fountain garden, special galleries, auditorium, a children’s library, and a scholar’s library that can be accessed through appointment.

For more information, you may visit their website: http://www.iamm.org