Hyderabad Tales – 40 Thieves Lived In Two Rooms Inside A Tree

In the Naya Quila premises of Golconda Fort in the City of Nizams, stands a majestic Baobab Tree with its branches hovering over the ground as if guarding its historicity. With a circumference of about 25 metres, this tree is the second of its kind in the world (the other Baobab tree is in Africa). The locals call it “Hathiyan Ka Jhad” (Elephant Tree) as its thick stem looks like the body of an elephant and the branches look like its several trunks. It is said to be more than 600 years old. The tree is originally from Madagascar in Africa and the legend has it that the wandering friars planted it as a gift to Sultan Muhammad Quli Qutub Shah during their stay in Golconda many centuries ago. This historical tree is unlike any other. The trunk of the tree has two rooms carved inside it. 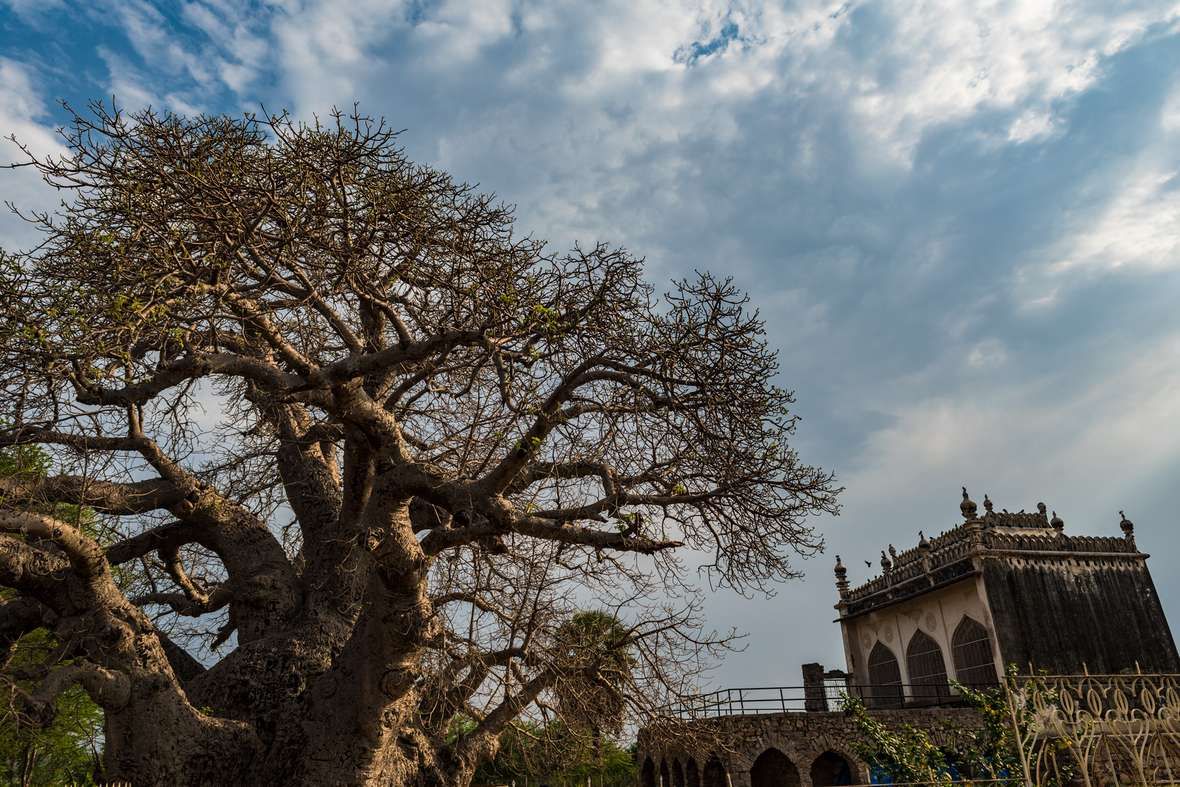 It was quite a task to reach the place. The narrow and curvy lanes that seemed to go round in circles were completely a maze. My internet was still not working (so there was no way I could use Google Maps) and we were lost. By asking the locals we somehow managed to reach our destination. The tree is located a few kilometres away from the old Golconda Fort near the Hyderabad Golf Association’s Golf course. Passing by the lush green premises of the golf course surrounded by the historical walls of Naya Qila is an experience in itself. It felt so calm and peaceful because this place is not very popular with the tourists. There was a scent of modernization intermixed with the history of Hyderabad. Mr. Aijaz told me that he grew up in this place. There used to be wilderness in place of the golf course. His voice had that nostalgia for something lost and replaced. His eyes still searched for that wilderness in the golf course. 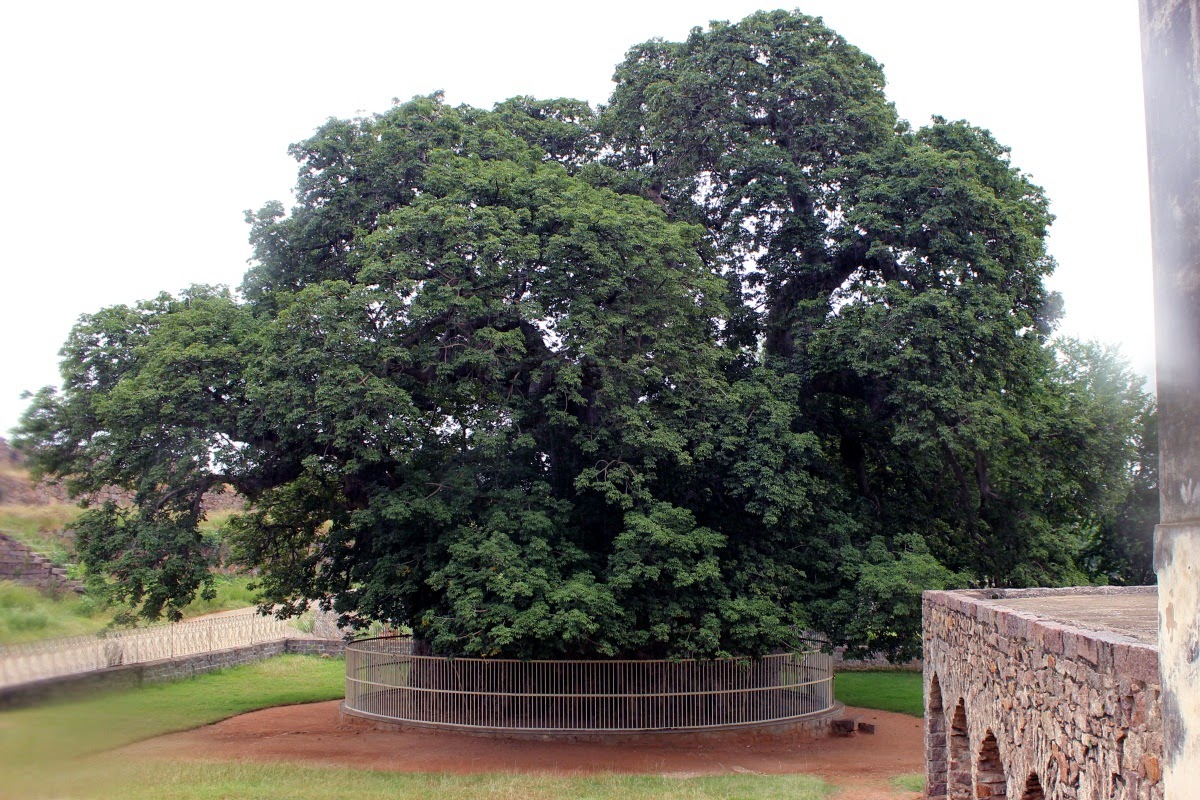 When I saw the tree, it was majestic and beautiful. It was surrounded by a steel fence.  Mr. Omar Bin Abdullah who has been looking after the tree and cleaning the rooms inside it for several years pointed towards the vandalism on the tree and said that it had to be fenced to prevent it from being damaged by such people.

There is also a mosque behind the tree which is said to be built by one of the influential courtesans. The more I looked at the tree in its magnificence the more my imagination played tricks on me. The branches looked more like dragons to me than the elephant trunks. I spent almost an hour walking on the ruins of Naya Quila and near the tree. It was so calm and peaceful that I did not have any thoughts in that moment. I was just there in the present moment and did not want to be anywhere else.

The Folklore of Tree with Rooms 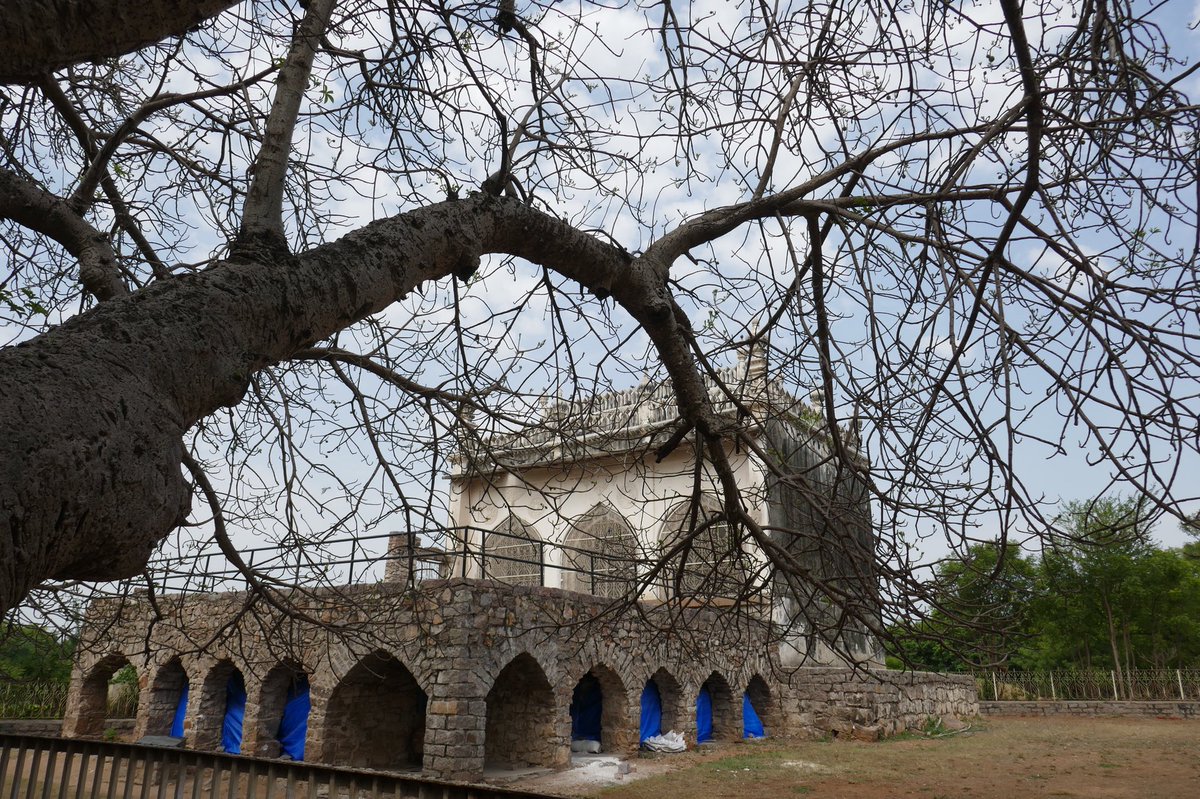 Mr. Abdullah told me about the legend quite similar to “Alibaba and the Forty Thieves” It is believed that during the reign of the QutubShahi rulers, there used be forty notorious thieves who would hide inside the tree trunk during the day and come out at night to carry out their criminal activities. For many years nobody could catch or find out the where they hid. One night, someone happened to see a streak of smoke emanating from the premises of the fort where the tree stands. The soldiers were immediately sent to look into the matter. On following the streak of smoke, soldiers reached the tree and saw that it is coming from inside its trunk. The thieves had lit the fire for cooking food which led to their fatal end. They were caught and taken to the King the next morning. The King ordered them to be hanged from the tree (He was not sure if they were hanged from the same tree or from different one.)

Mr. Aijaz had a very different explanation for the two rooms inside the tree. According to him, the Queen and the children of the royal household along with some guards used to hide here during the times of war when the King would go to the battlefield. He also mentioned that the rooms could house forty people. However, the space inside the trunk has shrunk over the years and therefore, it is difficult to believe that as many as forty people could live inside it in the past. 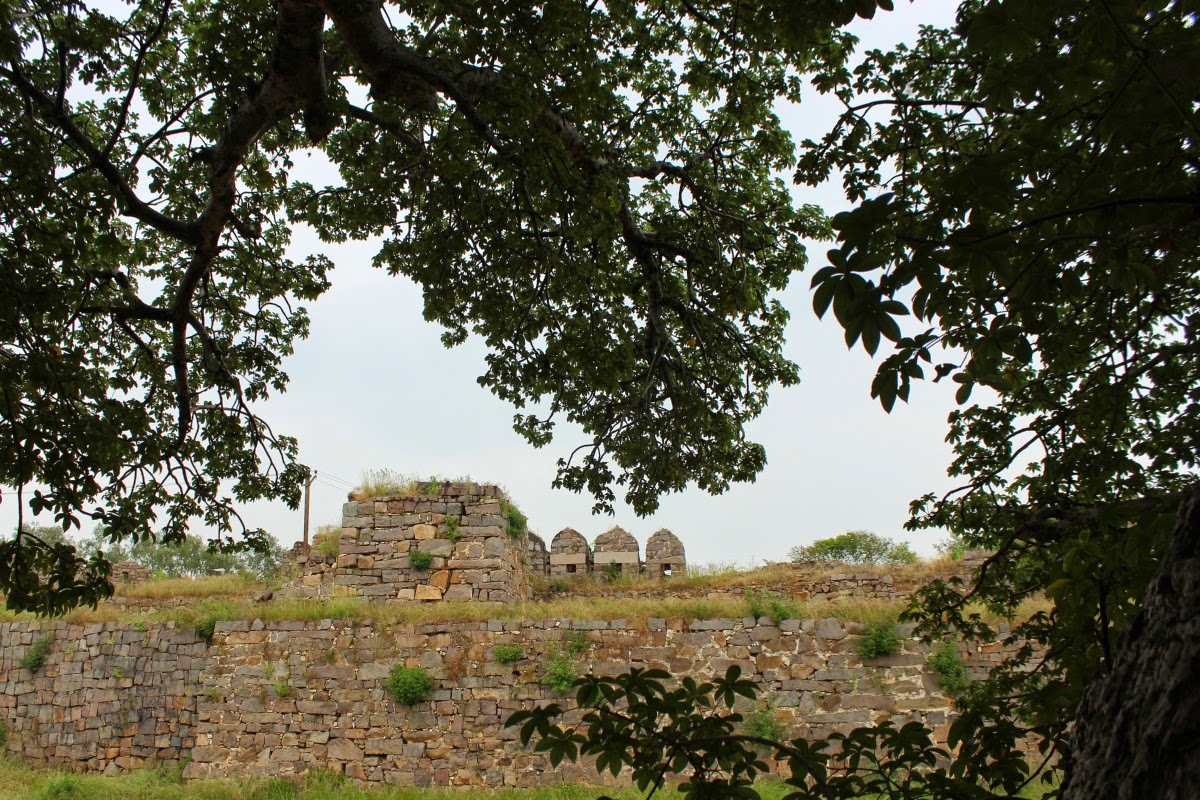 Nobody can say how true these legends are. But it is certainly worth visiting. It is a wonderful secret hidden in the ruins of Naya Quila and the lush green golf course. If you ever happen to find yourself in Hyderabad, do pay it a visit and experience for yourself what it’s like to exist between the modern civilization and ruins of a glorious past.

In The Lap Of The Mighty Alps