Framed by rolling mountains blanketed with dense forests, and strung on the magnificent Red Sea coast, Asir is an undiscovered gem of a region in Saudi Arabia, a vast sprawl of plains and valleys and waadis and titillating sceneries. So full of life and vigor and history and culture, Asir demands discovery, your unrelenting exploration, from climbing the towering Asir Mountains, to scouring the streets of Abha, its capital. 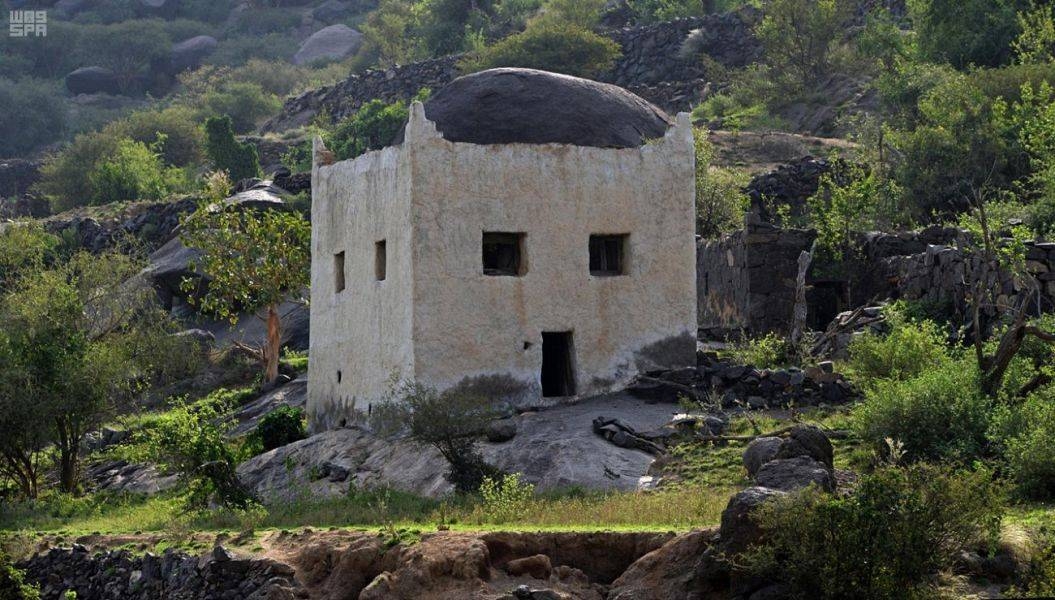 Must Know Facts About Asir

The region is heavily endowed with leafy, forested parks cradled against the mountain slopes, Tamniah, Abu Khayal, Prince Sultan Bin Abdulaziz Park, Hadabat Al-Arous, Rijal Almaa forests all scattered across it. And not only the green, but Asir’s cultural and heritage scene is also quite unparalleled too, residues of the past poking their head out of the thousands-year-old remnants of Jorash, Tabalah and other archeological sites.

Places to Visit in and around Asir:

Piercing the sky with its towering peaks at 3000m, Al Soudah is charismatic, with green valleys stretching across the eyes, fog blanketing the meandering slopes and a touristy village of Rijal Almaa, boasting of ancient culture and tribal traditions. It is also part of the Asir National Park, and proffers a plethora of adventures in the form of hiking, camping, etc.

It is claimed to be the highest peak in the Kingdom, perched beside Abha, and part of the gorgeous Asir Mountains that gird the region protectively and cater captivating views of the Tihama Valleys, spattered with flowery gardens and forested parks.

The capital of the Asir region, this city is bursting with beauty and wondrous heritage that is the staple of Saudi Arabia. Stunning, fog-coated mountainous landscapes will entice you, the Jabal Sawda being the highest one only 30 km away, offering exquisite snapshots of the city from high above. Its Art Street is a feast on your senses, festooned with colorful artworks and the purple of Jacaranda trees in spring. You can also take a cable car to the Green Mountain that turns epically gorgeous at night gleaming with green neon light. Or there is the Al Muftah Village, the bohemian art quarter suffused with art galleries, a calligraphed mosque, and trademark Asiri architecture and a general vibrancy. 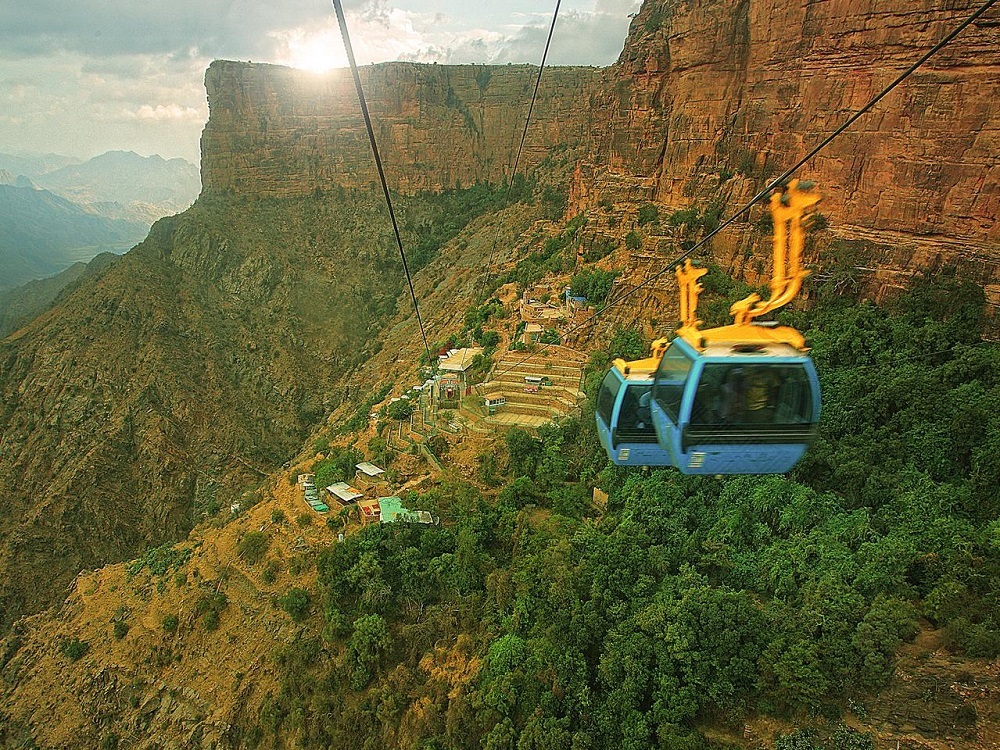 This charming village of the charming Asir region perched on the mountainous region of Al Soudah is a throng of ancient culture and heritage, in the works of being included in the UNESCO World Heritage List. Located close to the city of Abha, the village was historically important as a trading route for merchants and pilgrims toward Makkah and Medina. Architectural splendor cascades down its colorful stone forts and white quartz-flecked towers, heralding a past heritage of over 5000 years. The museum village also chronicles the area’s beautiful history through an impressive collection of artifacts and artwork. Another fascinating aspect of the village is the traditional men and their vibrant appearance – dressed in floral crowns on the head and outfitted in a colorful wraparound skirt called ‘futa’ – a lesser-known Saudi Arabian tradition.

This seemingly relentless sprawl of forested landscape holds a marvelous quality to it, touching the desert in the East, then spreading all the way to the gorgeous coast of Red Sea. The first national park of the country, it will stun you with its parade of astounding vistas cast off the towering mountainous Abha on its side and green valleys speckled with villages below. A wild array of wildlife can be found wandering around here, many of them endangered and rare species, like Arabian leopards, Hamadryas baboons, eagles etc. 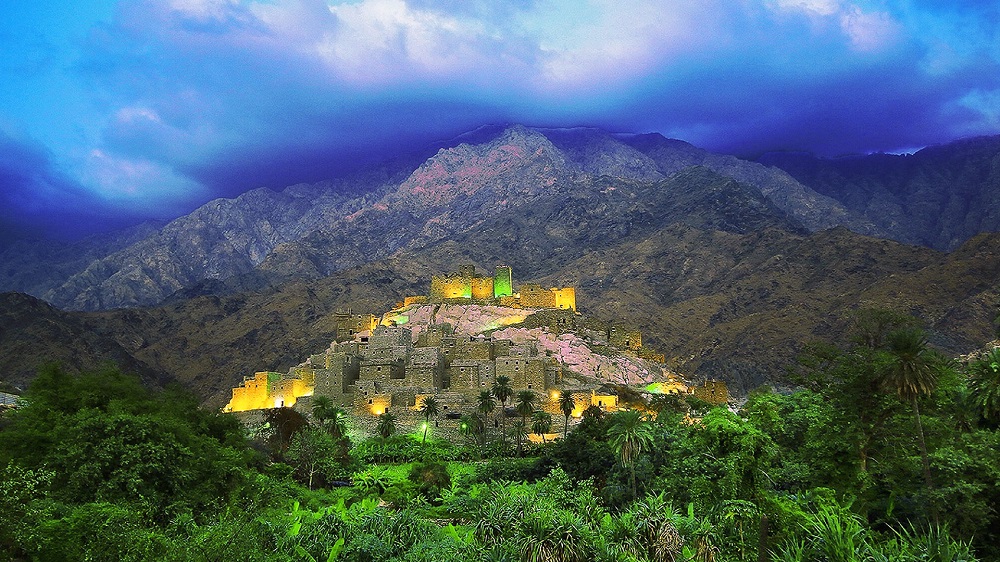 Perched on a clifftop, this is a hanging village, once accessible by rope ladder (habal meaning ‘rope’ in Arabic), historically believed to be inhabited by the local Qahtan tribe fleeing from the Ottomans some 400 years ago. The imposing Asir Mountains surround the traditional village, and sandstone houses stud its streets, throwing gliding shots of the amazing Saudi Arabic landscape at you from the cable car you have to take to reach it. Men in floral crowns and futa attire will greet you on arrival.

This park is nestled on a high mountain slope, towering scarlet peaks framing its sides, juniper trees sprinkled favorably along the terrain, the Al Sharaf Mountain rising in the West, and mesmerizing waterfalls tumbling down freely here and there. There is also an abundance of rare bird species, and ample opportunities for bird-watching as well as hiking and rock-climbing.

Places to eat in Asir: 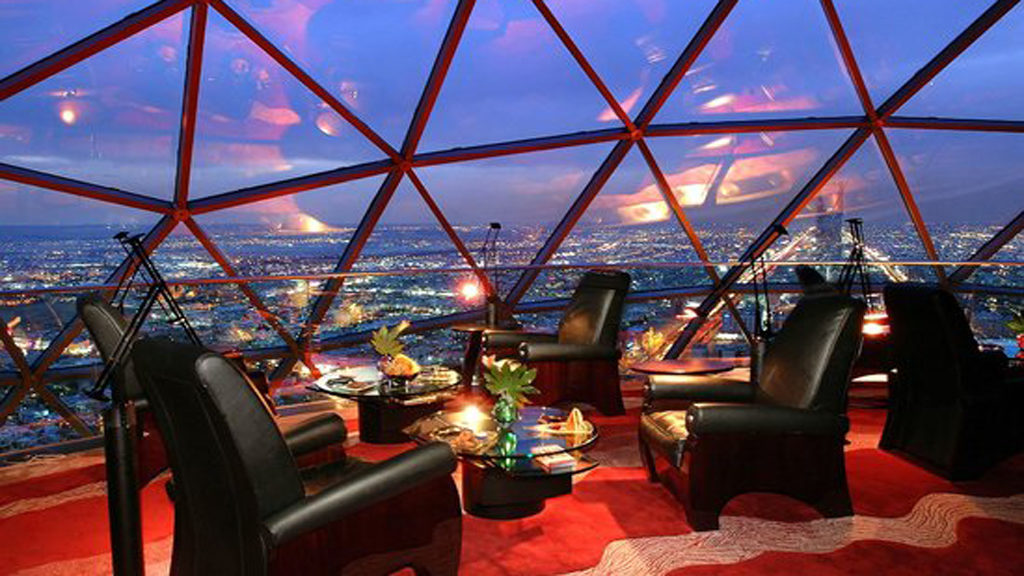 This restaurant at Abha Palace gives you a panoramic view of the lake and a delicious platter of Arabian food.

The gorgeous Green Mountain houses this gorgeous restaurant, where you can sample all the local cuisines while enjoying the gorgeous sceneries ahead.

It is a cute picturesque café in the fog city of Al Namas. You can gulp down cakes and coffees there after touring the city.

This restaurant is known for its grilled meat and comfy ambiance.

If you are missing the brilliantly-prepared Western dishes too much, you can just head into this.

With all these amazing sights to dazzle your visceral senses and these delicious dishes to affect your organs, in a good way, you cannot get a better deal than Asir for an awaited relaxing vacation. So get on your vacation time and discover the charming Asir already. You can also get a flat 10% discount on all hotels from Rehlat. Use the coupon SUPER10.

A reading junkie and travel dreamer, Tulika is passionate about visiting beautiful faraway lands. When she is not busy reading and writing, she can be seen feasting her senses on any Netflix series and K-dramas.