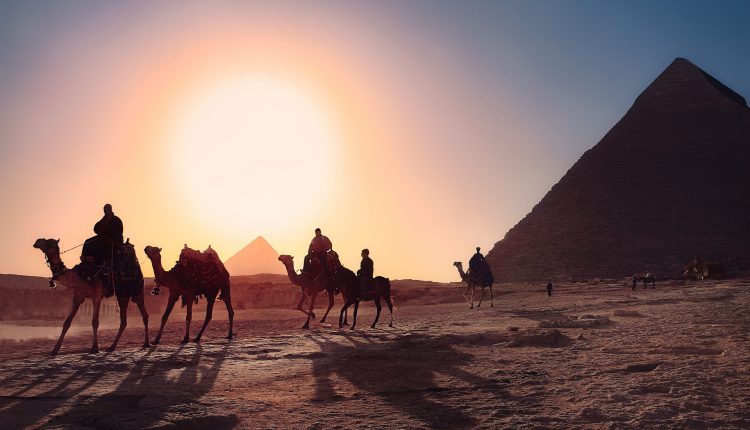 Cairo, a city that everyone wishes to visit at least once in their lifetime. And why not? It is truly a melting pot of old-world charm and new world hustle. Be it a history buff, an architecture lover, a culture vulture, or just a pure wandering soul, Cairo has something for each one of you.

Here is a 5-day itinerary for you to make the most out this splendid metropolis.

Day 1: It’s all about Pyramids!

The prime reason for Cairo to be on anyone’s bucket list is the Giza Pyramid Complex. Day 1 is all about the symbol of Egypt and the only surviving wonder amongst the seven ancient wonders of the world. The Giza pyramid complex or the Giza Necropolis, encompasses the Great Pyramid of Giza, the Pyramid of Khafre, the Pyramid of Menkaure, along with their associated pyramid complexes and the Great Sphinx of Giza. Apart from these renowned pyramids, the complex is home to many Egyptian monuments like the Tomb of Queen Khentkaus.

It is a good idea to visit the pyramids early in the morning to avoid a flurry of the crowd and continue exploring until lunchtime. Head to the Egyptian Museum after a hearty Egyptian meal and that quintessential tea.

The Museum of Egyptian Antiquities hosts an extensive collection about ancient Egypt world. With around 120,000 items on display, the museum is one of the largest in the region. Don’t miss on the collections of Tutankhamun and the Royal Mummies.

Give a poetic end to your day by taking a walk by the Nile on Qasr El Nile bridge, and enjoy your dinner in the neighborhood.

If you were left spellbound with the Giza necropolis, then day two will continue doing the same. Take a short trip to Memphis, the ancient capital city of Pharaonic dynasty. Though the city has lost a lot of its grandeur, it is worth a visit. Declared as the World Heritage Site by UNESCO in 1979, the town is now an open-air museum. You can admire at the monuments like Statue of Ramses II and a remarkable sphinx. The statue of Ramses II is particularly impressive not only in its sheer size but the amount of detailing in the sculpture.

Located in the neighborhood is the Saqqara necropolis which used to be a vast burial area of ancient Egypt. The Pyramid of Djoser, famous as the first pyramid ever built, is an impressive step pyramid.

Day 3: A day dedicated to Islamic and Coptic Era

After spending two days exploring ancient Egypt, it is now time to explore the Islamic and Coptic Cairo. Cairo is home to many beautiful and historically significant mosques. You can start with exploring the architectural gems including Sayyidna al-Hussein Mosque, Mosque-Madrassa of Sultan Hassan, Al-Rifa’i Mosque and other famous mosques. Don’t miss out on the Citadel, a prominent landmark for the Mosque of Muhammad Ali and astonishing views of downtown Cairo.

After spending half a day at Islamic Cairo, you can head to the Coptic Cairo area. Start your journey of mesmerizing Coptic art with the Hanging Church, so named due to its location above a gatehouse, creating an illusion of being suspended. The first Basilica-style church, Saint Virgin Mary’s Coptic Orthodox Church, is equally gorgeous.

Shopaholics can rejoice today, as the day is to indulge oneself in the plethora of souvenirs and products that Egypt offers. Start with the famous Khan Al-Khalili Bazaar which, along with being an architectural wonder is also a great shopping experience. From traditional jewelry to clothing and accessories, from exotic spices to beautiful souvenirs, you will find it all here. We are sure that a day won’t be enough here for the shopaholics but if you are not so crazy about shopping head to the Al-Moez street.

El-Moez street is lined up with several historic Islamic buildings that have stood against the time tide right from the Amr Ib Al-As to the new Ottoman and Muhammad Ali dynasty. It is also home to an old Ottoman house, Bayt Al-Suhaymi which is worth a visit. Make sure you visit the El Fishawy, the oldest coffee shop which has had some illustrious people as their patrons.

If you have not enjoyed the mighty Nile when in Cairo, then your trip is incomplete. A relaxing felucca ride on the beautiful Nile while enjoying its blissful breeze is a must. Indulge in an hour-long ride to see Cairo in a different light. After the ride head to the Cairo tower, which is located in the vicinity to witness the breathtaking panoramic views of Cairo. You can experience these views both during the day and night.

5 best Souqs to shop from in Oman