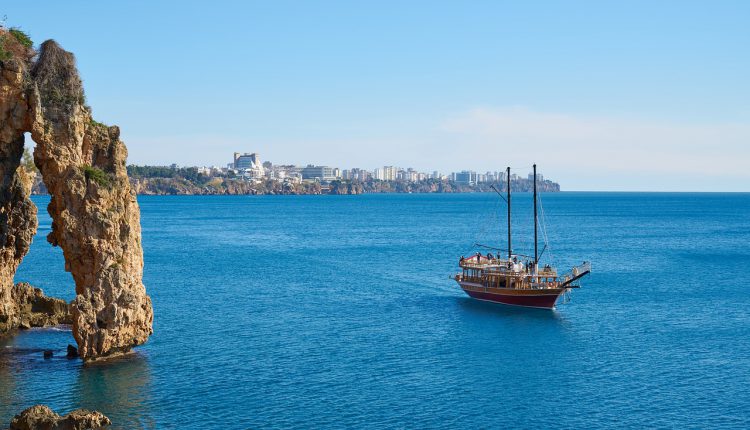 Antalya, the Turkish port city, is a melting pot of rich architecture, history, and natural beauty. Ibn Batuta, the famous Arabic traveler who visited Antalya in the 14th century, wrote about it – ‘a most beautiful city. It covers a large area, and though of vast bulk is one of the most attractive towns to be seen anywhere, besides being exceedingly populous and well laid out.’

Today, it is one of the most important cities in Turkey and a significant tourist attraction. From waterfalls and beaches to architectural gems and international resorts, Antalya has it all. Check out the top things you can do in this beautiful city.

Top Things To Do In Antalya

The city of Antalya was founded during the Hellenistic period but came under the Roman Empire during 133 B.C. The ruins of this glorious period are beautifully preserved in the city of which Hadrian Gate is the most popular. A visit to Yivli Minare Mosque, a beautiful building that can be easily distinguished by its massive, 13th-century minaret is a must. If you would love to see a panoramic view of the old city, do visit the Kaleiçi Panoramic Elevator. You can shop at the plethora of souvenir shops here and buy some of the Turkish carpets too.

Antalya derives its beauty from the Taurus mountain range and the gorgeous Mediterranean Sea. And the view of the Mediterranean Sea from the Old Harbor is a treat you should not miss. Right from the 2nd century to the 20th century, this harbor was the main port of Antalya and responsible for its prosperity. The cute cafes, boutique shops, and quaint bazaars lined up here add up to the beauty of the Old Harbor.

Soak in the Duden Waterfalls

If you are seeking a quieter spot than Duden, you can also visit Kurşunlu Falls that are located just outside the city. The gorgeous waterfalls form a pool that makes the whole scene an ideal picnic and relaxing spot.

Relax on the pristine beaches

The incredible Mediterranean coastline stretching across Antalya is its best feature. Lara and Konyaalti are two of the main beaches of Antalya. Konyaalti is located in the west and is open to the public. Whereas, Lara is located in the east and is home to one of the best luxury holiday resorts in the world. For a quieter beach outing, take a day-trip to Kaputas.

Enlighten yourself with Antalya’s history

By now, you know that Antalya has a rich history of its own and the best avenue to explore it is the Antalya Museum. The exhibits displayed are right from the Bronze Age to the Byzantium Empire. Don’t miss the silver hoard display, ancient mosaics from Seleukeia and iconic statues from Perge.

Take day trips to the neighborhood.

The neighborhood of the city of Antalya is as beautiful as the city itself, thus explore it as and when you can. The ancient ruins of Perge are the epitome of Roman architecture. The vast stadium here, built to accommodate fifteen thousand people is mostly intact and beautiful.

The historical site of Aspendos is another place worth visiting. The beautifully preserved theatre of antiquity is incredible and dates back to the 160 AD. Climb atop the theatre and soak in the breathtaking views of the city.